Designers Patricia Urquiola and Yves Behar and architects Frida Escobedo and Kunlé Adeyemi will all be on the judging panel for Dezeen Awards 2019, which is now open for entry.

The four are among 25 leading figures from the world of architecture and design that have been named as judges for Dezeen Awards 2019, which launched this week with a party in Stockholm.

Back for its second year, the awards programme celebrates the world's best architecture, interiors and design projects. There are also awards for the best established and emerging designers and studios. 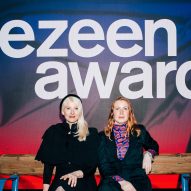 Some of last year's winners will also be joining the 2019 jury, including designer of the year Atelier NL co-founders Lonny van Ryswyck and Nadine Sterk, who also designed the Dezeen Awards 2018 trophy.

John Wardle, founder of John Wardle Architects, will also be on the panel after winning the House Interior of the Year category for Captain Kelly's Cottage.

To stay updated with all awards news, sign up to the newsletter at www.dezeen.com/awards/subscribe.