Belgian design studio Alliages Design's Toupie storage units are made up of a stack of open metal cubes attached to a vertical floor-to-ceiling pole.

The storage system can be configured to include between two and five cubes – each 36 centimetres squared – with the option to integrate trays and towel rails depending on the user's needs.

The boxes pivot on an off-centre axis. Once installed, the user can spin each cube around to reveal the contents or to hide them away, and in doing so change the profile of the unit.

The cubes come in six colours, red, green, two different blues, orange and pale grey, with the option of mixing and matching different colours in the column.

As steel isn't suited to a humid environment, the studio added to the original design with a version available in raw or varnished aluminium, named Toupie Alu, that can be installed in the bathroom. The updated version was unveiled at Maison&Objet in Paris last month.

The open cubes in the Toupie Alu model feature punctured dots on three surfaces, and can also be installed with between two and five cubes. Towel rails can be integrated into the stack as well as trays.

Alliages Design designed the units for a customer who wanted a place to store his musical scores.

"The musical scores were all different sizes, with different bindings, and in different colours, which from a distance gave a very disordered image," explained the brand's designer Jean-Michel Dondelinger. "The content of the storage had to be such that it could be forgotten." 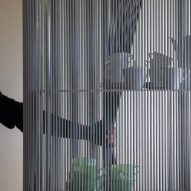 The storage needed to be located in the customer's music room alongside his grand piano.

"This large horizontal instrument led us to think about an "opposite" storage element, in this case a relatively thin and vertical one," said Dondelinger.

The units can also be lined up to form a colourful room divider that separates spaces whilst providing flexible storage for large format art books, files, or two rows of paperbacks, up to a weight of 30 kilograms per cube.

Fellow Belgian designer Bram Kerkhofs created a modular system of furniture that functions as both a shelf and a cabinet, with a woven elastic curtain that wraps around a hard shell.