London's brutalist-era Welbeck Street car park is to be torn down and replaced by a luxury hotel, despite campaigns to save its unique facade.

Last week Westminister Council approved plans submitted by Shiva Hotels to demolish the brutalist car park, designed in 1971 by Michael Blampied and Partners, and replace it with a 10-storey hotel.

Plans to knock down the building, which has a striking diamond-patterned facade formed of pre-cast concrete, were first approved in 2017.

Eric Parry Architects put forward designs for a hotel with a ceramic facade, but the developers later switched architects. The new design by EPR Architects includes a pattern of thin golden louvres that twists over the entrance and continues up a circular tower on the corner of the building.

With its distinctive facade and place in Britain's brutalist history, the Welbeck Street car park has plenty of fans in the architecture community.

Dezeen columnist Sam Jacob named it one of the most important unsung buildings in the capital, while a design company has turned its facade into a wallpaper pattern. 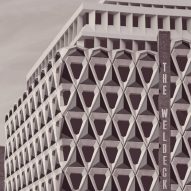 However, its status as a car park in an increasingly pedestrianised part of London, where land is valued at a premium, made it a target for developers.

Alternative plans to save facade ignored

After the first plans to desmolish it were mooted, London-based architecture studio JAA submitted a concept proposal to the council that showed how the multi-storey car park could be converted into a hotel whilst preserving the original facade.

Speaking to the Architect's Journal after the most recent news of Welbeck Street car park's fate, the Twentieth Century Society said it was "very disappointing that its "stunning and greatly appreciated" facade had not been preserved in the new plans.

In recent year's several notable brutalist buildings designed in the 1960s and 1970s have been demolished including Alison and Peter Smithson's Robin Hood Gardens in London.

Photographs of the demolition of this building along with those designed by Paul Rudolph, John Johansen, John Madin and Bertrand Goldberg were included in an exhibition at the Pinkcomma art gallery in Boston.

Main image is by Scott Dougall.