Casa P82 is set within a 20th-century apartment building in Madrid's city centre, and has been overhauled to feature a sequence of "flexible" rooms filled with natural light.

Formerly host to a number of dark, compartmentalised living spaces, the apartment's owner approached locally based Lucas y Hernández Gil to create a more comfortable layout so that she could regularly invite friends and family over.

Retaining the apartment's huge porthole windows, the studio knocked through a majority of the non-load bearing walls to free-up the floor plan.

The walls been replaced by full-height partitions that can be slid back and forth to provide privacy to different rooms – one appears between the living area and master bedroom. Here, the timber headboard of the bed also doubles up as a work desk, forming a small area where the inhabitant can sit and work.

More moveable partitions made from panes of fluted glass are also used in the corridor, partially obscuring the sleeping quarters.

A couple of concrete support beams were also preserved, which the studio hopes will offer a harsh contrast to the home's otherwise "delicate" furnishings like the wire-frame chairs.

The form of the apartment's original windows has then been echoed in the entryway, where a circular artificial skylight has been created.

Although a majority of surfaces have been freshened up with a coat of white paint, a pop of colour is offered by a gridded orange storage unit.

Its front and rear side features a series of thin bars that sit diagonally across the shelves, intended to emulate the geometric shapes seen in paintings by Swiss-German artist Paul Klee.

"The rigidity is provided by diagrammatic elements with different angles that create a score, a stave where books and objects are collected as musical notes," explained the studio.

"It aims to be a simple and delicate design, a functional yet expressive object." 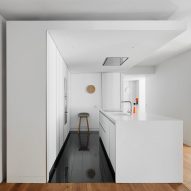 The floors, kitchen cabinetry, and a handful of walls have been crafted from oiled oak wood.

This isn't the only period property that Lucas y Hernández Gil have worked on. Earlier this year the practice revamped an 18th-century guesthouse in Spain's Extremadura region, pairing its original arched ceilings and decorative doorways with new mortar walls.