Japanese architect Junya Ishigami has been selected to design this year's Serpentine Pavilion, which will take the form of a huge slate roof rising up out of the landscape.

The Tokyo-based architect, who leads the studio Junya Ishigami + Associates, will become the 19th designer of the prestigious annual commission, which will be installed beside the Serpentine Gallery in Kensington Gardens, London, this summer.

Ishigami describes his design as being like "a hill made out of rocks". It will comprise a roof made out of natural slate, arranged to look it has emerged from the ground.

Like his previous architectural projects, which include the glass-walled KAIT studio at Kanagawa Institute of Technology, the design is intended to show that nature and architecture can be in harmony with one another.

"My design for the pavilion plays with our perspectives of the built environment against the backdrop of a natural landscape, emphasising a natural and organic feel as though it had grown out of the lawn, and resembling a hill made out of rocks," Ishigami explained.

"This is an attempt to supplement traditional architecture with modern methodologies and concepts, to create in this place an expanse of scenery like never seen before," he continued.

"Possessing the weighty presence of slate roofs seen around the world, and simultaneously appearing so light it could blow away in the breeze, the cluster of scattered rock levitates, like a billowing piece of fabric."

Ishigami established his studio in 2004 after working as an architect for Pritzker Prize-winning studio SANAA, the studio that created a mirrored canopy for the 2009 edition of the Serpentine Pavilion.

Like SANAA, Ishigami often introduces dream-like elements into his designs, from clouds to forests. Recently completed projects include an elongated glass visitor centre that stretches through Park Vijversburg in the Netherlands and a kindergarten filled with huge curving shapes.

Other designs in the works include a Japanese ferry terminal modelled on a "beautiful mountain range" and a cloud-like building with a boating lake inside for Copenhagen harbour.

"We are thrilled to be able to share the designs for Junya Ishigami's Serpentine Pavilion – a structure informed by the natural world and situated in the middle of one of London's greenest spaces: Kensington Gardens," said Serpentine Galleries directors Hans Ulrich Obrist and Yana Peel.

"The pavilion and its accompanying programme will be central to the Serpentine's General Ecology strand – an ongoing investigation into complex systems, interspecies landscapes and the environment."

A different architect is selected to design the Serpentine Pavilion every year, with the only criteria being that they should not have completed any UK projects before. 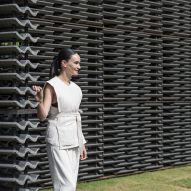 Zaha Hadid completed the first one in 2000 and it has since been designed by names including Peter Zumthor, Bjarke Ingels, Sou Fujimoto and Herzog & de Meuron. Last year's, made from a "woven tapestry" of concrete tiles, was designed by Mexican architect Frida Escobedo.

Ishigami's Serpentine Pavilion 2019 is likely to be unveiled in early June. Throughout the summer, it will host a programme of events that include talks, parties and performances.