Striped House acts as both a visitor information centre and concierge office for the Aranya tourism company on a resort near the port city of Qinhuangdao, on the coast of China's northeastern Hebei province.

Wutopia Lab rebuilt the company's square concierge office block, replacing the walls with glass. The architecture studio wrapped this glass box with an external wall, which has a distinctive striped blue and white facade.

The architecture studio took direct inspiration for both the colours used on the exterior of the tourism centre and the circular, porthole-style windows, which are punched through the wall, form the nearby sea.

"What Aranya keeps on emphasizing and reminding me is the ocean," said Wutopia Lab's lead architect Yu Ting.

"This made me think of the pattern of sea-striped shirts that is immediately associated with sailors and the ocean. I decided to use this pattern to cover completely this wall and grounds."

The wall around the box-shaped office creates a curved courtyard, which acts as a transitional space between the office and the city.

The floor of courtyard is also striped blue and white to match the walls.

According to studio the striped pattern also softens the solidity of the wall, creating an optical illusion that seems to distort the shape of the information centre.

"This has become a newly formed antithesis, that evokes a certain giddiness that leads you to the sea," added Ting. 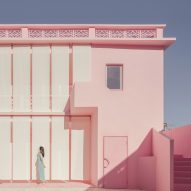 As the structure is located near the ocean it had to be made of materials strong enough to withstand occasional strong winds that blow in from the sea. It is constructed out of strong-yet-lightweight polycarbonate and perforated steel.

The Striped House is a continued exploration into the use of imagination in ambiguity in Wutopia's projects. Last year, Wutopia designed a pair of houses – one blue and one pink – that explored gender constructs, as well as designing a bookstore in Shanghai that takes inspiration from the human mind and body.

Photography is by CreatAR Images