The inky brushstrokes of traditional Chinese paintings influenced the fluid forms of this museum complex that architecture firm Wutopia Lab has designed for a property developer in Qinhuangdao.

Located at the centre of a park within the Seatopia resort in the Beidaihe area, the complex comprises an art gallery, a dance studio, a yoga room and a theatre. The museum's name refers to its role as a quiet island within the bustling residential district.

The various programmatic spaces within the 1,300-square-metre cultural centre are arranged as a sequence of independent elements connected by gently curving walls and corridors.

"Monologue Art Museum is a multifunctional space," said Ting. "It allows different people to be in different spaces at the same time, but one can be alone in an artistic way."

The overall plan resembles a triangle with curved edges. The four main functional zones are enclosed within an outer wall that also surrounds a black reflecting pool.

Ting described the boundary wall linking the different spaces as "a shifting ink line" that evokes the brushstrokes used in Chinese painting.

Just like brushstrokes, the museum's perimeter varies in thickness along its length, with narrower areas forming corridors that widen to accommodate spaces including the art gallery and a tearoom.

The architect said the museum's layout resembles "a slowly unfolding hand scroll" that begins with a small, circular auditorium.

The multipurpose auditorium functions as a foyer and a performance space, with a circular stage positioned beneath a curving skylight that allows daylight to illuminate the interior.

A corridor lined internally with glazing provides a view of the central water feature as it sweeps around towards the nearby yoga room.

The maximum cantilever of the roof is 4.6 metres, which helps to ensure a fully transparent wall with no supporting elements interrupting the view of the reflecting pool.

The yoga room is housed in a cylindrical volume featuring a two-storey glass facade that changes colour gradually across its height. 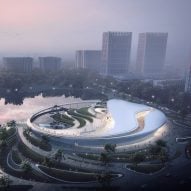 Ting felt it was important to introduce this multihued element to enliven the otherwise monochrome scheme. The structure contains a yoga space positioned at the water level and a suspended changing area above.

The rectangular dance studio is designed as a box with translucent glass walls that allow daylight to naturally illuminate the interior while filtering views outwards to limit distractions.

A mirrored wall along one side of the classroom conceals an entrance foyer and a spiral stair leading to a mezzanine changing area.

The water then spirals and twists before disappearing beneath the yoga room and making its way towards the Yellow Sea.

Six trees that emerge from the water alongside the dance studio reference a landscape painting called Six Gentlemen by the Yuan dynasty artist Ni Zan, of which Ting is a fan.

Part of the complex's outer wall is formed of perforated concrete bricks arranged in a modular pattern that allows light to penetrate. Ting called the perimeter surface a "flower wall" and suggested that it resembles the pattern created by a brush as the ink on it dries.

Yu Ting founded Wutopia Lab in 2013 along with Min Erni. The firm's previous projects include a guesthouse near Suzhou with rooms that appear to float within its gabled volume, and a cloud-shaped pavilion near Shanghai that was designed to look like melted chocolate.

The photography is by Seven W unless stated otherwise.