Limón's designs are the result of experiments with metallic coatings, applied to medium-density-foam bases shaped like simple seats or side tables.

Over the forms, primed so they become non-porous, the silver nitrate is applied one layer at a time. Each is left to dry at 32 degrees celsius, "then a catalyst is applied to create a chemical reaction with which the chrome effect comes out", Limón told Dezeen.

He also adds paint dyes to the material to produce different hues. Finally, the surfaces are polished so the next layer can be applied on top.

The process is repeated three or four times, depending on the desired depth of colours. Once satisfied, Limón takes a circular sander to the surfaces, gently eroding away portions of the layers.

"This process is done by hand and the control of the effect is limited by chance," he said. "The erosion is very delicate, and done with water sandpaper that removes the matter that is wanted."

The result is an effect similar to an oil slick, with ribbons of colour trailed across the surfaces in fluid patterns.

"After many tests with very clear ideas, and others more random, we managed to create this process that plays with the chromatic effect in such a three-dimensional and graphic way," said Limón. "It's so graphic that it looks like it was printed." 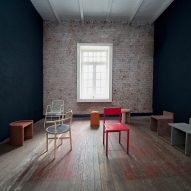 "Brutalist" furniture features in PL:VV collection by PLDO and Savvy

The designer first discovered the technique through the DS Paint workshop in Barcelona, where he became fascinated by the potential finishes possible with metals – as seen in the work of artists like Jeff Koons.

Limón sees the initial products he created during the collaboration with DS Paint as prototypes, and now plans to develop the forms onto which he can apply his finish.

"I think now comes the second part of the game, which defines how you can get a perfectly designed form for this type of effect," he said.

Limón runs his own design studio PLDO, and is also partner and architecture director at Savvy Studio, which has offices in New York City and Mexico City.

As a collective, the they created a set of "brutalist" furniture, while Savvy Studio's recent projects have included a hotel in Brooklyn's Gowanus neighbourhood and a nautical-themed cafe in Manhattan's Tribeca.