The installation represented the culmination of a residency that Japanese architect Murakami and British artist Groves have been undertaking at A/D/O, a design hub that was founded by MINI in Greenpoint, Brooklyn.

"The installation is an exploration into the duality of light in an architectural context" Murakami told Dezeen in the video interview, which was shot by Dezeen at A/D/O.

Visitors to the installation, set inside a closed cuboid volume in A/D/O's atrium, passed through a dark corridor before entering a womb-like room with a red carpet, walls and lighting.

"We worked with local glass artists to blow these tubes," said Murakami. "We've encapsulated a gas called krypton inside them."

Krypton is an inert gas found in the Earth's atmosphere that forms plasma when charged with a high-voltage. "It's the most abundant state of matter in our whole known universe," Groves said.

Voltages controlled by algorithms pulse through the tubes at intervals, creating a range of fluctuating light effects.

The activity of the plasma within the tubes responds to environmental conditions, including the proximity of visitors' bodies. "The light reacts to electromagnetic fields, so when you go near it some tubes really respond to your body," Murakami explained.

A second room, which features a yellow carpet and walls, was accessed by passing through a curtain, and contained two artworks mounted on the wall that the duo describe as Fog Paintings.

Each was made up of a vitrine into which fog is pumped at intervals, obscuring moving LED lights behind. "Robotic mechanisms pass moving lights behind this constantly swirling fog," said Murakami. 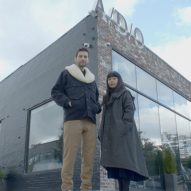 "The fog paintings are a real convergence of analogue, digital and real materials," she continued.

According to Studio Swine, the installation is an exploration of a convergence between nature and technology. "We wanted to create a new sensation you wouldn't get with either technology or nature, but something that you get by combining those two," said Murakami.

The duo is known for a portfolio of multidisciplinary projects that encompass art, small-scale architecture, design and film.

Previous works include an installation featuring a metal tree that produces smoke-filled bubbles, and a huge ceramic sculpture installed at the Eden project that emits scented mist.