Launched on Kickstarter, the Escala pen has a long, triangular cap that doubles as a scale ruler graded with imperial and metric scales.

Aimed at architects and engineers, who use pens and rulers to mock-up plans and sketches, the fountain pen slides out of the cap so both components can be used simultaneously, without having to carry two separate objects.

"Fountain pens and scale-rulers are two fundamental tools for architects, engineers, and designers. We wanted to create one product that could be used simultaneously," Carlo Aiello, founder of Ensso, told Dezeen.

"There are many pens with ruler markings on one of their sides but you need to either use it as a pen or as a ruler," explained Aiello.

"In our product, the cap serves as a scale ruler and the fountain pen resides inside until you pull it out to use it. You only need Escala for taking measurements and making annotations at the same time."

Made of aluminium and anodised in matte black, the pen cap is engraved with 12 of the most common scales used by architects and engineers.

"Escala is anodised in matte black to create a high-contrast with the laser-engraved markings that expose the raw aluminium behind," explained Aiello.

The product has a minimalist design that combines elements of the traditional triangular scale ruler with a standard cylindrical pen. It is compatible with both bottled ink and ink cartridges. 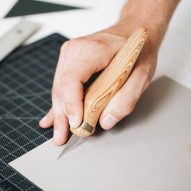 "Escala is the fusion of two designs. We aimed to reduce these two objects to their minimum and recombined them into one. We followed the golden ratio to create the dimensions for each component in relation to the others,"  he continued.

Another project aimed at fellow architects and designers came from designer Sean Riley, who created a curvy cutting knife to spare architects from the hand cramps, bruising and sore knuckles endured while making models.

Canadian company The Work of Mind has also designed a compact measuring tool that professionals like architects, designers, sewers and carpenters can use on the go.