The Arvo Pärt Centre, which is dedicated to the Estonian composer, is deep in an pine forest and has no main entrance or exit.

A single zinc roof covers the building, with polygonal cut outs positioned to open courtyard spaces to the sky. Curving glass exterior walls look out into the dense pine trees near the village of Laulasmaa, near the coast of the Baltic Sea.

Thin circular columns are arranged around the exterior, echoing the trunks of the pines and arranged in a pattern that represents the rhythm of Estonian composer Pärt's compositions.

The columns are spaced closer together or further apart to alternate the levels of light reaching the interior spaces.

Nieto Sobejano Arquitectos looked to Pärt's music for inspiration for the design of the cultural centre, which is dedicated to promoting Estonia's musical heritage.

In particular, they looked at the connections between music, which is structured by time, and space, which is created by architecture.

"This dichotomy that links music and architecture – time and place – is at the origin of our project for the Arvo Pärt Centre searching a balance between the intimacy of the Estonian artist's compositions and the serene beauty of the landscape," said Nieto Sobejano Arquitectos co-founders Enrique Sobejano and Fuensanta Nieto. 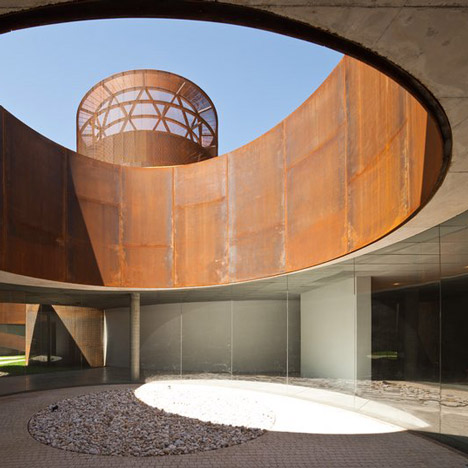 Inside one of the centre's courtyard spaces is a concrete chapel. At one point in Pärt's career he suffered an eight year creative crisis that he worked through by joining the Orthodox Church and studied Gregorian chants, influencing the development of his signature compositional style.

Alongside the Arvo Pärt Centre a helical tower formed of slim metal columns rises above the pine trees giving visitors views out towards the Baltic Sea.

These two architectural elements were designed by the architects to bring a sense of "strangeness" to the centre that "deeply links the project with the personality of Arvo Pärt".

The Arvo Pärt Centre was one of the 40 projects shortlisted for the Mies van Der Rohe Award 2019.

Sobejano and Nieto, who were awarded the Alvar Aalto Medal in 2015, have completed a number of museums across Europe, including  an extension to a museum inside a ruined German castle, and the San Telmo Museum extension in San Sebastián, which they clad in perforated aluminium.