Choupette, who is rumoured to have inherited some of Lagerfeld's millions, endorsed the prototype woollen bed design when it was delivered to her via her agent.

"We sent our cat hammock to Choupette's agent in Paris as a gift," said LucyBalu founder Mathias Wahrenberger.

"Sometime after that, we received a message saying that our Swing was Choupette's new favourite place," he added.

"This was the moment in which our dream of collaborating with Karl Lagerfeld's cat became reality."

Made from felted wool, the hammock portion of the Swing bed hangs between two powder-coated metal wall mounts.

Felted wool was chosen because it is a soft, natural material. The fibre textile is good at absorbing and retaining heat, making it a cosy spot for a cat.

Choupette's approval was a coup for the LucyBalu designers, considering the fluffy white Birman cat is used to living in the lap of luxury, flying in a private jet and being attended to by maids.

"We only choose certain projects that we think really match Choupette," said her agent Lucas Berullier.

"With Choupette loving her hammock – which she sleeps and relaxes on – it is obvious that not only we, but cat owners all around the world should be introduced to the LucyBalu brand."

Along with naps, cats love to sit in high vantage points where they can observe goings-on. The minimalist Swing is also an aesthetic match for Choupette, with its white struts and pale felt complimenting her fur coat. 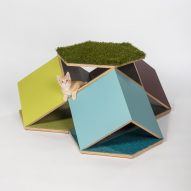 "We are honoured to have had the opportunity to be this close to Choupette," said LucyBalu designer Sebastian Frank.

"I mean, we were the first people to ever be allowed to take pictures and videos of Choupette in her home," Frank added. "We received a very warm welcome from the entire Choupette family, despite all the hype this famous blue-eyed Birman cat receives."

The LucyBalu x Choupette Swing bed will be a limited edition, with only 1,000 pieces made and all bearing Choupette's signature. Gifted to the German fashion designer in 2011 by the model Baptiste Giabiconi, Choupette was Lagerfeld's favourite companion and muse until his death in 2019.

She has previously been the face of a makeup line for Shu Uemera and turned into a teddy by German toymaker's Stieff, but Swing will be her first foray into furniture design.

British architect Asif Khan has also made his pet furniture debut this year, creating a chic wool-covered table that doubles as a dog bed for Japan House's Architecture for Dogs exhibition.

In Taiwan, KC Design Studio built an entire room in a holiday home around the client's feline companions, complete with cat ladders, a carousel and fluffy swing.