Architecture studio Precht has developed a concept for modular housing where residents produce their own food in vertical farms.

Architects Fei and Chris Precht, who is also the co-founder of architecture studio of Penda, developed The Farmhouse as a way to reconnect people in cities with agriculture and help them live in a more sustainable way.

Precht designed The Farmhouse as populations around the world are increasingly becoming city dwellers who have lost touch with how their food is produced, while food transportation has an increasingly damaging effect on the environment.

The conceptual modular system would allow people to grow food in residential tower blocks to eat or share with their local community.

"I think we miss this physical and mental connection with nature and this project could be a catalyst to reconnect ourselves with the life-cycle of our environment," said Chris Precht.

CLT is more sustainable than other low-cost building materials such as concrete because it locks in the carbon absorbed by the trees that were grown to make it.

Each of the module's wall would be made of three layers. An inner layer, facing the home interior, would hold the electricity and pipes with the surface finishes.

A layer of structure and insulation would form the middle layer, and on the outside layer would hold all the gardening elements and a water supply.

Different modules would have different types of external systems, such as hydroponic units for growing without soil, waste management systems, or solar panels to harness sustainable electricity. 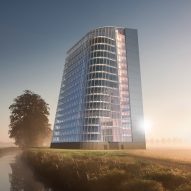 Single-family users would be able to build their own homes using as many modules as they chose, or taller housing blocks could be formed by arranging the A-frames into stacked duplexes.

Each duplex would have an open plan living and kitchen space on the ground floor, with tent-shaped bedrooms on the upper floors. On the outer edges of the tower residences could have balconies.

Growing gardens would be arranged so they are either private or communal, with the inverted gaps left between modules providing V-shaped buffer zones between apartments and giving the plants natural light and ventilation.

The smallest living configuration available is just nine square metres with a 2.5-square-metre balcony. Hypothetically, Precht said, the tower could be built as tall as a city would allow.

"The system doesn't limit the height of the tower, because it is adaptable to a different thickness of structure," Chris Precht told Dezeen.

"But national regulations can limit the use of wood. In some countries like Japan, Canada, Scandinavia, Austria, UK, you can construct 18 to 30 stories and building codes around the globe are adapting fast to the use of CLT."

An indoor food market would be located on the ground floor of the tower, along with a root cellar for storing food in winter and composting units for turning food waste back into growing material.

The Prechts were motivated to design The Farmhouse system by their own experience. Two years ago they relocated from central Beijing to the mountains of Austria, where they grow their own food.

"Our motivation for The Farmhouse is personal," said Fei Precht.

"We live and work now off the grid and try to be as self-sufficient as somehow possible. We grow most of the food ourselves and get the rest from neighbouring farmers," she continued.

"We have now a very different relation to food. We are aware that this lifestyle is not an option for everyone, so we try to develop projects, that brings food back to cities."

Working as Penda, Chris Precht worked on the design of a hypothetical CLT tower for Toronto with tree-covered balconies, and a concept for a house in Germany with an interlocking green roof.