Italian architect Fabio Fantolino has divided up the fourth and fifth floors of a residential building in Turin city centre to create two apartments for a mother and her son.

Located in a five-storey building that dates back to the 1600s, Casa Lagrange is owned by a mother and son who wanted to live in the same building but also have their own separate space.

The mother lives in the larger street-facing apartment which spans across the front of the building on the fourth floor and includes a bedroom in the attic on the fifth floor.

This larger apartment has an interior inspired by the 1950s, while the son's smaller apartment at the rear of the building takes its design cues from the 1970s.

Both apartments feature hand-sanded Hungarian oak herringbone flooring and also some matching hardware and furniture such as door handles, and a round dining table.

Described by Turin-based Fantolino as "elegant and sophisticated" the mother's 1950s-inspired apartment features rich materials such as marble, fabric and polished steel.

"The flavour of the 1950s finds its greatest expression in the living area," explained Fantolino.

"The conversation area is developed around a Minotti Freeman Tailor sofa, featuring a rigorous titanium-coloured cotton fabric and a double-stitched linear motif, which is typical of the 1950s."

The grey sofa is complemented by a set of De La Cuona armchairs upholstered in pale pink velvet and Bowl tables by Danish brand Mater.

The study and dining area has a walnut desk lit by an Aballs T by Parachilna suspension lamp, while a black Tango lamp by Indian design studio Paul Matter balances over a Calacatta gold marble table surrounded by dark velvet Verpan chairs.

The two parallel doorways that lead into the kitchen from the dining area are clad in black burnished iron. Alongside the archways is a glass-fronted showcase for dishes that is recessed into the wall.

The kitchen is made from American walnut, Calacatta gold marble and black Fenix – a scratch-resistant nanotech material with a soft matt finish. 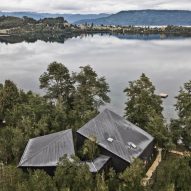 The apartment's bathroom is clad in Arabescato marble and features a walnut washbasin cabinet.

Located in the top of the house under its peaked roof, the apartment's master bedroom is lined in light grey wood panelling and benefits from two large skylights.

Located at the back of the building on the fourth floor, the smaller apartment is designed to recall the 1970s with a more informal lounge area.

The kitchen in this smaller apartment can be closed-off from view behind black Fenix doors, serving as a background to the dining area. The bathroom is clad in dark red Levanto marble with fittings in black and chromed iron.

The apartment's sleeping area features a blue velvet headboard and a section of white panelling in the corner that houses a wall cabinet, bedside table and custom made lamp.

This house in the Iranian city of Karaj by Kamran Heirati Architects, was also divided in two with an elevated passageway spanning a swimming pool to connect its two halves.

Photography is by Giorgio Possenti and styling is by Tom Design.