Comprised of a dining room, cocktail bar, and small cafe, Grind in London's Greenwich neighbourhood has been completed in a contemporary mix of colours and materials.

It follows the style of the eight other sites that Grind has across the capital, which were also designed by Melbourne-based studio Biasol.

This includes a branch in Clerkenwell, which features navy velvet furnishings, and another set inside the historic London stock exchange, which has herringbone-pattern walls clad in marble tiles.

"Greenwich Grind is designed to make an impact, bringing the inner-city Grind experience to the laidback London suburb and appealing to locals, visitors, or tourists," explained the studio.

Maintaining the internal layout of the 46 square-metre site – which was previously occupied by a high street chain restaurant – the studio has used different colours to loosely delineate different zones of the venue. Black and white mosaic floors run throughout.

The rear brick wall of the cocktail bar has been painted teal blue, matching a grooved drinks counter which sits at the room's centre.

Black-frame stool seats with cool grey cushions have been used to dress the space, along with spherical pendant lamps.

Surfaces have been painted off-white in the restaurant, which is topped by a glass atrium-style roof. Tall glazed doors then lead through to a greenery-filled al fresco dining area, which is meant to evoke a similarly outdoorsy atmosphere to the nearby Greenwich Park.

A huge block of pale marble forms a service counter in the cafe where customers can quickly stop by and grab lunch or a snack, made easier by the separate entrance which has been created specifically for this area.

Tins of Grind's own coffee beans line also the shelves as decoration. 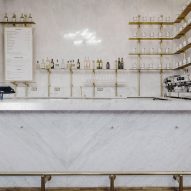 "There's an easy flow and operational connection between each [room], the areas function independently and together, each with distinct but complementary aesthetics," added the studio.

This isn't the only all-day dining spot that Biasol has worked on – back in 2018 the studio completed Farmer J in London's Monument, which boasts cloudy concrete walls and pale green fixtures.

Earlier this year the studio also developed the interiors of a family home in Melbourne that was inspired by classic Parisian apartments, which features white-painted living spaces with decadent decor details.

Photography is by Handover.