Lebanese-American designer Nabil Issa has launched his debut line of furniture, which includes a throne-like golden chair made from brass.

The collection of furniture, called Objects of Desire, includes storage, seating, dining tables and bed frames made in Portugal from high-quality materials such as wood, brass, copper and various marbles.

Issa, who previously spent 25 years working in interior design, marketing, advertising, music and film before becoming a furniture designer, described the primarily black, grey and gold furniture collection as "minimalistic yet bold" and made up of pieces that feature "pure lines and original forms".

Showcased during Maison&Objet, Issa said that his work is inspired by his time spent living in global cities such as New York, Los Angeles, Milan, London and Beirut. The result is a collection with a diverse range of unusual and glamorous influences.

Described as "a modern-day throne", Issa said that his Iconic chair, made from a single piece of brass, was created as a commentary about the "paradox of life in the limelight, that the glitz and glam come at a hard price".

"It is part machined and part hand-crafted," Issa told Dezeen. "It takes a team of three highly skilled craftsmen around 10 days to complete, and is produced as a limited series."

The designer explained that the process of creating the furniture is more like that of creating jewellery.

"We treat our pieces like jewellery when it comes to construction and finishes. We use massive materials, whether it's brass, stainless steel or wood, and only choose the highest quality and variety," explained Issa.

Elsewhere, the low-lying modular sofa and upholstered bed frame that make up the L-Series are inspired by Italian furniture from the 1970s, while the O Chair – part of a wider O-Series – is a playful re-interpretation of a confession chair with high sides and a window fitted with a curtain.

An angular series of seating and tables called the Diamond Series is described as blending "over-the-top 1980s Miami vibes meets sci-fi" and the Island Series is inspired by the "jet set island party circuit", which Issa was part of during his four-year-stint as a music producer and DJ in Miami.

As its name suggests, the Tub chair has a tub-shaped seat hand-formed in brass and set within a minimal steel frame. 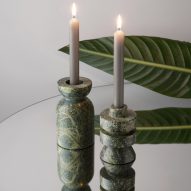 This piece, according to Issa, is designed to evoke the sensation of "being pampered and comfortably submerged in luxury and decadent surroundings".

Other collections have more humble references, such as the globe-shaped Galactic lamps, which nod to Issa's love of 1970s and 1980s sci-fi movies, or the arch-shaped brass frames of the Tunnel chairs and tables, which are inspired by the passage into Manhattan through the Lincoln tunnel.

Speaking about the collection's title, Objects of Desire, New York and Paris-based Issa said: "Desire is created when the senses are drawn to the right combination of aesthetics, emotions and experiences. This is what I've aimed to create in my debut collection; a number of original pieces that are uniquely eye-catching, bold in their direction and pure in their lines."

"Designs that use a natural harmony of shapes, ratios and materials. I've spared no effort to ensure supreme workmanship and the use of the highest grade materials to bring these designs to life," he continued.

Geometric forms made from brass and marble have featured on a number of luxurious furniture collections in recent years.

British designer Bethan Gray created a collection of tables with marble tops wrapped in bands of brass, while product designer Richard Yasmine designed a marble and brass side table with removable phallic legs for "kinky-minded people".