House of Chickens, designed by architecture studio SO?, is a modular coop for 800 chickens on an artist's farm in Turkey.

Istanbul-based practice SO?  designed the coop on the Palanga Art and Architecture Farm in Erzincan, a project of Kutlug Ataman, who is commissioning structures for animals and wildlife in the neglected rural area.

The chicken coop was built with simple materials. It has oak plywood facades, oxidised metal panels and a roof of corrugated metal. As the farm expands, there is space to build more modules alongside the existing structure to expand the  coop.

The low-tech materials were chosen as they were easier to maintain and replace in its remote location. Wood was also deemed a more natural choice for the animals to shelter in.

"The reciprocity between human and animal is the main design aspect that shapes the sectional design of the project," said the architecture studio.

"The short section of the project lets the people collect the eggs, without having to go inside the coop and disturb the chickens, while the longitudinal section is formed by main functions of the shelter; sleeping and incubating."

As summers can be hot, the sloping roof extends to form a shady canopy under the building for the chickens to rest under during the heat of the day.

SO? examined the habits of chickens and drew on local people's prior experience of looking after a flock of fowl to make sure House of Chickens' occupants would be contented.

"Designing for a user that does neither demand nor pay for a property is another ambitious task in the design process," said the architecture studio.

"If the users – chickens – do not appreciate the house, they simply won’t live in it." 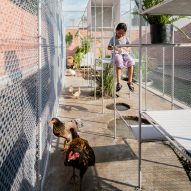 Tropical Space creates playground for chickens and children in Vietnam

Designing interesting homes for chickens is an unusual challenge for architects. Chan Brisco Architects designed a chicken coop that looks like a log cabin in rural Finland, and in Vietnam architecture studio Tropical Space built an elaborate chicken run that doubles as a children's playground.

House of Chickens' interior is cross ventilated and allows natural daylight to filter through, but indirectly. Timber roosting bars are angled to be easy for chicken claws to rest on.

Wooden nesting boxes are stacked three high and can be accessed through hatches on the outside, so as not to disturb the birds too much.

The coop rests lightly on trusses the ground, which is being regenerated as part of the farm's program to replenish nutrients in the depleted soil.

It's the first building to be completed in a masterplan that includes barns, feedlots, greenhouses, goose coops and kitchens. There is also an area dedicated to rehabilitating wild birds and a campaign to plant 5,000 trees a year.

Photography is by Ali Taptik.