Dezeen promotion: Ventura Projects has announced the return of its Future and Centrale exhibitions to Milan design week, where it will display the latest works from emerging and established studios and brands including Lavazza, Gufram, Lensvelt and Modular.

The return of Ventura Future and Ventura Centrale to the city's annual design festival – which is taking place from 9 to 14 April 2019 – will mark the organiser's 10th anniversary at the event.

Designers at the Ventura Future exhibition will explore innovative processes like synthetic biology and address current global affairs such as migration, while Ventura Centrale will host a range of established practices.

Ventura Centrale will remain at its usual setting in a series of vaults near the Italian city's main train station, but Ventura Future has found a new location in the Tortona district in the Base Milano industrial complex.

"Milan not only embodies design but the city lives and breathes its key principles," said Margriet Vollenberg, founder and art director of Ventura Projects.

"Milan is the perfect environment with its generous curiosity for the new and unknown and its loving affection for the aesthetics of the established," she added.

Mexican-American artist Isabelle Sanchez Jacques is one of the many names exhibiting at Ventura Future who will be using their designs to address global affairs.

Jacques will invite the public to consume homemade Mexican dishes while listening to anecdotal stories from migrant workers, in a bid to call into question issues like heritage and intolerance between cultures.

Switching from a sense of taste to a sense of smell, Dutch company SOM Tales of Perfume will be presenting a "fragrant experience" at the exhibition. At the exhibit visitors will be able to move through a composition of 100 wooden pieces that are infused with various components of pure botanical perfume.

"Over the last years there has been a detectable shift from the designer of objects to the designer of stories," said the organisers. "Ventura Projects has always been at the forefront of this development."

This year's edition of Ventura Future will also explore the topic of bio-design. Eight Dutch designers  including Matilde Boelhouwer will show their visions for a "liveable earth". Boelhouwer's contribution will be a set of artificial flowers that turn rain into sugar water, to serve as emergency food sources for city-dwelling insect pollinators. The bio-design project is supported by the Embassy and the Consulate-General of the Kingdom of the Netherlands in Milan. 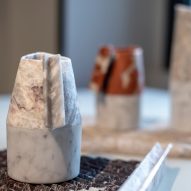 Call for entries to Ventura Future 2019 exhibition in Milan

Design School Kolding in Denmark will ask the question "where do we feel at home?" in their exhibit, visualising the relationships between mobile personal objects and the ideas of home.

"The freedom that design students have to explore current topics never fails to excite," said the organisers.

Thanks to the success of previous years, this year the Ventura Centrale exhibition will be expanding to host 16 vaults instead of last year's number of nine.

Japanese manufacturer AGC and Korean practice Noroo Group will be among those exhibiting in the vaults, as well as Italian brands Lavazza together with Gufram and Aria studio, Dutch furniture brands Lensvelt, with Belgian lighting manufacturer Modular, Weltevree and Swiss practice Sky-Frame and Freitag.

Baas will showcase his latest works at the exhibition, in a display that aims to entertain visitors with his artistic interpretation of what he has dubbed the "attention economy".

Rapt Studio will make its first appearance at Milan design week with an installation that explores the emotions of connection.

Called Tell Me More, the installation will feature drapery-clad "stages" where each person will be asked to answer a question posed by the stranger who came before them, before moving on into a lounge where they are encouraged to strike up a conversation with the people all around.

Dezeen is main media partner for Ventura Projects, which was established in 2010 when founder Margriet Vollenberg launched the first edition of Ventura Lambrate. Since then, she has also set up Ventura exhibitions in London, New York and Berlin.