The Swedish Centre for Architecture and Design in Stockholm has a new exhibition space within one of its lofty galleries, featuring wire mesh surfaces, a huge round window and a ramp winding round its exterior.

Made primarily from steel, the multi-level structure is described by the museum as "a robust machine for fast-changing, experimental exhibitions".

"The museum had always lacked such a gallery, and we also felt that the lack of an independent gallery scene in Sweden required us to provide a platform for emerging, polemical practice."

Boxen is installed within one of the museum's two existing exhibition halls, a pair of 19th-century gymnasiums once used for military training, that face out towards a part of the building that was added by Rafael Moneo in the 1990s.

While its muted tones of white and grey blend in with its surroundings, Boxen's exposed utilitarian structure makes a bold statement. It features a visible framework of structural I-beams and a corrugated steel roof, which is raised up to allow light to enter from above.

The ramp begins by the gallery entrance and wraps the entire exterior. With a balustrade made from simple textile mesh, it passes across the centre of the round window and finishes at a balcony that stretches along the full length of the structure, giving visitors the opportunity to view exhibits inside the gallery from all angles.

From here, a concealed staircase provides an extra route inside the gallery.

The gallery space has an area of 156 square metres in total, laid out as a rectangle with "classical double-square proportions".

Its internal walls are lined with birch plywood and white plasterboard to create a more traditional white-cube interior. The backside of these surfaces is painted silver, to better fit in with the metal mesh and netting it sits beside.

Made primarily from steel, the structure is deliberately utilitarian in appearance

Long commissioned the project shortly after becoming director of the museum in 2017. His aim was to give the museum an opportunity to become more versatile, while also offering a platform to an emerging architecture studio based in Stockholm. 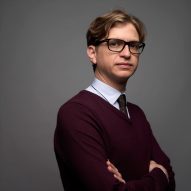 Since opening in June 2018, the gallery has hosted three exhibitions: Modellarkivet, a look into the archive of Stockholm's Urban Planning Department; Space Popular, an installation looking at the relationship between architecture and the digital world; and Young Swedish Design 2019, a showcase of emerging local talent.

"Dehlin Brattgård's project gave us more than we could have expected," said Long.

"I think they have made a quietly radical piece of museum architecture. It densifies the museum's spaces, creating a beautiful, elegant interior, but also providing the drama and fun of walking up the ramp," he continued.

"Views into the gallery are gradually revealed, and it provides new perspectives on the historical building it sits within. It is an engine of curatorial ideas, and is an intensely social space, a place to see and be seen – what any good public space always is."