A nursing professor and explorer have designed a portable life-support system that they claim allows divers to eat, sleep and decompress underwater.

Ocean Space Habitat functions like an underwater tent that can be rapidly deployed to provide and maintain a breathable environment.

The design takes the form of a frame covered by an inflatable collapsible envelope, which can be anchored. The envelope can be fixed with a removable propulsion unit that propels it through the water.

The interior is equipped with windows, a seat, a replenishable oxygen source and a carbon dioxide scrubber which continuously removes carbon dioxide from the mobile environment.

It was designed and patented by diving pioneer and explorer Michael Lombardi and Professor Winslow Burleson, the director of NYU Meyers College of Nursing's cross-disciplinary NYU-X Lab.

In conventional scuba diving, divers must periodically come up for air, restricting the depths that they can reach before having to return to the surface.

Much like an underwater base camp, the habitat provides a place where divers can remove their equipment before transferring to the tent. Once inside the tent is "blown down" with fresh gas to create a relatively dry atmosphere suitable for napping, talking, eating, and decompressing before returning to a dive. 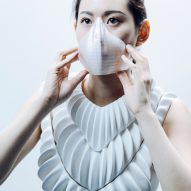 The habitat allows divers to dive deeper and stay underwater for longer periods of time. Several divers at a time can swim up into the dry chamber to decompress and it can even be used to treat decompression sickness in a controlled manner.

Although other fixed undersea bases exist, the Ocean Space Habitat is unique due to its portability. The tent-like structure and anchoring system are light enough to pack in checked luggage and take on a plane.

In an interview with National Geographic, Burleson reported that the design is also affordable, costing less to buy than some single diving operations cost to run: "I like to think [it offers] an opportunity for a truly 'immersive' experience," he told the magazine. "The tent allows us to take home a bit more than we would as temporary visitors using conventional scuba techniques."

"Imagine if a tourist, normally limited to a one-hour dive, could stay under through that magical transition from sunlight to twilight to darkness — with all the life that emerges," he continued. "People could experience the ocean in a whole new way."

In 2017, two Seattle-based aerospace engineers invented a floating survival shelter that, in the event of a disaster, can house between two and 10 people for up to five days.

Made from aircraft-grade aluminium, the spherical watertight capsules will protect occupants from the initial impact of a natural disaster, as well as sharp-object penetration, heat exposure, blunt-object impact, and rapid deceleration.