Located in the municipality of Nacka beside an inlet of the Baltic Sea, the Fogia showroom features a handful of original features that hint at its industrial past.

It occupies the former steam engine workshop of a shipbuilding yard that was established in 1878. The last ship was launched from there in 1981, before it became the site of notorious Swedish nightclub Docklands in the 1990s.

For its transformation into a Fogia retail space, the brand called on the help of Stockholm-based creative agency Code Concept, asking for a flexible floor plan where different displays can be easily put up and dismantled.

"We set out to create a modern showroom with elegance in an industrial environment," Emelie Bredfell, retail architect at the agency told Dezeen.

"Fogia works with several styles in their furniture collection, with a story behind each product – we wanted to communicate this and make each story more clear and direct."

Instead of making major structural alterations, the agency decided to erect a series of boxy frames to sit beneath the building's lofty ceiling. Existing crittall windows and timber floorboards have also been retained. 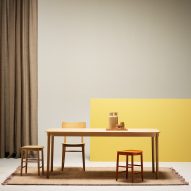 The frames – which are crafted from steel to mimic the exposed metal beams above – are used to create living room-style set-ups, showcasing the brand's sofas, side tables, and rugs.

Certain pieces, like armchairs, are placed in front of moveable coloured partitions.

"They enable us to style environments without having to break down a permanent installation twice a year, which goes against our belief of using materials wisely and consciously," added Richard Prime from Fogia.

At the rear of the store is also a small cafe that serves drinks and snacks to browsing visitors.

During this year's Stockholm Design Week, Fogia hosted a dinner at the showroom to unveil their 2019 collection. Its preceding range had been inspired by the 1970s, featuring rich colours, curved shapes, and heavy fabrics.

The design week also saw Färg & Blanche set up an installation inside a centuries-old family home, and Note Design Studio create artificial snow dunes on top of the At Six hotel.