Visitors to Stockholm Design Week can clamber over a snowy landscape without getting wet, in an installation created for Tarkett by Note Design Studio.

With the rest of the city is blanketed by real snow, Note Design Studio's snowy installation is sheltered from the elements, inside a pair of glass pavilions on the roof of Stockholm hotel At Six.

Called Snowtopped, the snow-like mounds lean up against the walls and spill out over seating areas.

The installation was created for French manufacturer Tarkett, to explore the wider potential of the brand's vinyl flooring products.

By creating the freeform curves of snow dunes, the designers hoped to show the flexibility of the material, while also celebrating the wintery weather that sets Stockholm Design Week apart from furniture fairs in places like Milan and Miami.

"With the furniture fair in February, it's always cold, it's always dark and often it's like it is now, with a lot of snow," explained Note Design Studio co-founder Johannes Carlström.

"We wanted to make something suited to Stockholm," he told Dezeen. "We looked at the shapes of snow dunes, at how the wind makes these nice shapes after the snow has fallen, and we tried to recreate that."

The dunes are constructed from huge pieces of styrofoam, created by a manufacturer in Norway. Tarkett's vinyl completely covers the surface of the blocks, despite their complex geometries.

With a palette of tones ranging between bright white and soft grey, they are intended to replicate "the soft, flowing silhouettes of a Nordic winter landscape" as closely as possible.

Note Design Studio hopes that people will interact with them, whether by simply leaning against them or by climbing on top.

"We wanted to create a space where the versatility and flexibility of the material is accentuated in an unexpected way," said Charlotte Ackemar, a product designer at the studio."

"The initial thought was to have something like a skate park, where you can take off your shoes, walk around, slip, slide and interact with it," added Carlström. 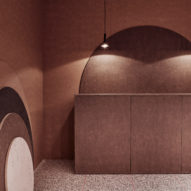 Once the event is over, Tarkett is keen to reuse the installation at other exhibitions in the Nordic countries, but also suggests it could find a permanent home in a school.

"Since it's made from pieces, it can fit to any kind of space," explained Pierre Delabie, Nordic marketing director for Tarkett.

Note Design Studio and Tarkett previously worked together on The Lookout, an installation at the Stockholm Furniture Fair last year. The project was named best stand at the show and also won the Small Interior of the Year 2018 prize at Dezeen Awards.

They will also collaborate on a large exhibition in Milan this April.

Snowtopped is on show at At Six, Brunkebergstorg 2, from 4 to 8 February.