Rich colours, curved shapes and heavy fabrics all feature in the latest collection from Swedish furniture brand Fogia, which is launching at Stockholm Design Week.

A curved armchair by Luca Nichetto, a set of brown-hued ceramic dishes by Note Design Studio and a tan-leather seat by Stefan Borselius are among the 14 products in Fogia's 2018 collection, which combines Scandinavian minimalism with 1970s forms and colours.

Other highlights include a set of geometric upholstered poufs, a side table and shelving unit with matching circular details, and a series of patterned rugs.

"We always strive to make furniture with international elegance," said company CEO Marcus Huber. "We create high-quality furniture with a design that lasts for a long time – that's our philosophy."

Stockholm-based Note Design Studio has contributed three designs to the collection. As well as the pedestal-shaped Upp ceramics, the studio designed a glass pendant light that resembles stretched fabric in shape, and a huge oak table that pays tribute to Japanese joinery.

According to Note's co-founder Cristiano Pigazzini, the table was originally designed as a meeting table for its own office.

"Our idea was to make something that you never throw away, that lasts forever," he explained. "It's a very simple construction, inspired by the Japanese way of pinning."

Pigazzini also worked with the other designers that created pieces for the collection, to ensure they all shared a similar aesthetic.

Italian designer Luca Nichetto took inspiration from a bean when creating the curves of his Mame armchair. It features a rounded profile, black metal legs and plump upholstery.

"The idea was to make a very classic shape – a match between classic Scandinavian design and a classic French chair, with a high back," said Nichetto.

Other chairs in the range include a lounge chair with wooden legs by Danish studio Norm Architects and a new version of Andreas Engesvik's Bollo chair, which has become one of the most recognisable items in Fogia's repertoire.

Swiss design duo Diiis created both the small Hawu shelving unit and the Gito side table. The table features a circular inset, which functions as a coaster, while the shelves feature semi-circular bookends.

The collection is completed by three designs from Stockholm-based designers: a new larger version of the modular Retreat sofa – designed by Monica Förster back in 2015 – the flower-inspired Poppy poufs by Nina Jobs, and the double-layer glass Big Sur table by Simon Klenell and Kristoffer Sundin.

The collection was unveiled at the Haymarket hotel as part of Stockholm Design Week 2018, which continues until 11 February. It is also on show at the Stockholm Furniture and Light Fair, which opened today. 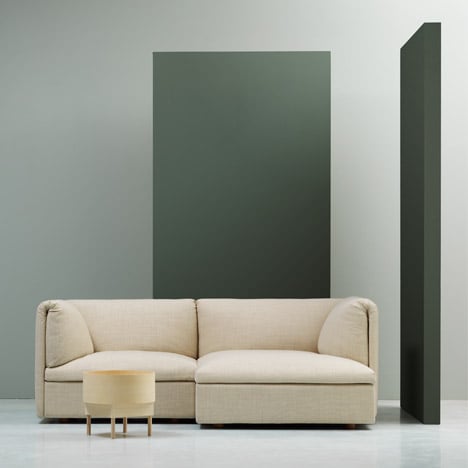