A funicular station on a mountain in Italy has been converted into a museum with an adjoining restaurant that balances on stilts by Gerhard Mahlknecht of EM2.

The Lumen Museum of Mountain Photography is located 2,275 metres above sea level at the summit of Plan de Corones in the Kronplatz region of South Tyrol.

Mahlknecht, who is a founding partner at locally based firm EM2, was tasked by the Kronplatz mountain resort with redeveloping the site into a museum that celebrates the work of  mountain photographers from around the world.

EM2 previously worked for Kronplatz on the Messner Mountain Museum, where it oversaw the transformation of a medieval castle into a museum dedicated to man's relationship with the mountains.

The museum, founded by renowned mountaineer Reinhold Messner, comprises a network of six sites dotted around South Tyrol and Belluno, which includes a mountaineering museum designed by Zaha Hadid Architects located close to Lumen on the Plan de Corones mountain.

The Lumen museum occupies the site of a former funicular station ran, which was built in 1963 and ran until 1986 when it was replaced by the current railway. An extension added in 1974 provided residential accommodation and a restaurant that closed in the mid-1990s.

"The choice to build the new museum on the site of the old mountain station derived from the will of the client to repurpose this place for its special connection with landscape," project architect Stefano D'Elia told Dezeen.

The project began with the demolition of the restaurant and dwelling, which were structurally unsound. The station building's concrete structure was stabilised and renovated to enable the repurposing of its interior.

"We decided to maintain as much of the original spatiality of this room as possible and design it as cornerstone of the exhibition space," said D'Elia. 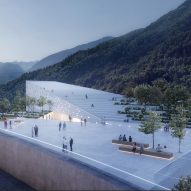 A stepped internal section of the main building was preserved in order to evoke the memory of the old funicular station. The large internal volume was reorganised to accommodate a lobby and exhibition space arranged across several levels.

Its terraced interior is overlooked by balconies and a bridge that connects this space with the rest of the exhibition areas. Skylights punched into the pitched ceiling allow daylight to enter the whitewashed hall.

Full-height glazed wall opposite the entrance preserves the proportions of an opening in the facade of the funicular station and frames an expansive view across the adjacent valley.

The LumenMuseum of Mountain Photography is set across four floors and houses an events space with a capacity of 200 people in addition to the galleries.

A significant intervention made by Mahlknecht and his team is the addition of an elevated structure housing the new AlpiNN restaurant. The extension's lightweight form and structural composition are intended to contrast with the solid mass of the main building.

"This contrast is highlighted also by opposing materiality," D'Elia said.

"The museum is designed as an introverted and abstract volume, connecting with the landscape only through the huge windows opened on the exhibition space, while the restaurant is strongly characterised by its construction."

The new addition comprises a pair of fair-faced concrete slabs sandwiching glass walls that wrap around the dining area. The glazing and the structure's position cantilevering from the mountainside enhance the feeling of floating within the alpine scenery.

The restaurant's interior was created by London-based designer Martino Gamper, who has previously worked on illusory window displays for Prada and a drum kit for Nike made from the company's Flyknit material.

The restaurant space is described as "taking the form of a living room" that provides a cosy environment for dining with different views in all directions.

Gamper combined ethical and tactile materials to complement chef Norbert Niederkofler's culinary concept of only using ingredients sourced from the mountain, and created wooden chairs and light fittings especially for the space.

Photography is by Marco Zanta unless otherwise stated.