Italian designer Martino Gamper has created a "homage to the humble corner" in the shop windows of fashion house Prada (+ slideshow). 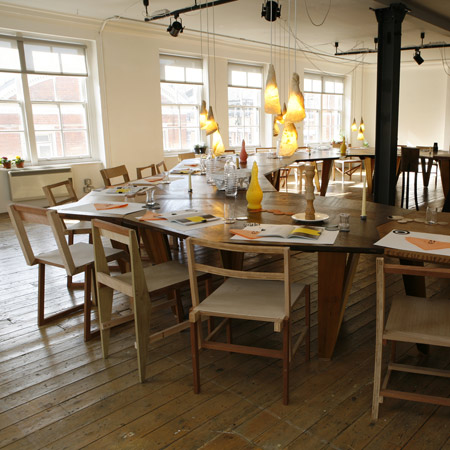 The installations, named Corners, used panels of wood veneer to form enclosed angled spaces in which the mannequins are placed and are being replicated in Prada stores around the world.

"Corners is an evolutionary window design concept by Martino Gamper in collaboration with Prada which pays homage to the humble corner," said a statement on Gamper's website.

"The design draws its inspiration from perspective, fragments and contrasts between natural materials. Those elements are enhanced by the simplicity of a corner which is a common thread for all the displays."

Wood grains on the walls and floor are angled to emphasise the perspective and make the spaces look tighter.

Some of the spaces feature shelves and raised sections of flooring for displaying accessories.

Images of landscapes including mountains and forests are mounted in thin vertical strips at the back of each niche, aligned parallel to the glass windows in front.

Initially installed at the brand's flagships in London and Milan (pictured), the concept will soon be rolled out across Prada stores worldwide – each with a slightly different spin on the idea.

"Corners is a space within a space, making each display a unique story designed to evolve with the seasons," said Gamper.

According to his website, the designer "discovered his love of corners and began to probe the multiple emotions provoked by the single right-angled boundary" while studying at London's Royal College of Art, and has experimented with the architectural element ever since.

Prada's collaboration with Gamper is a departure from the brand's long-term partnership with Dutch architect Rem Koolhaas and his firm OMA, which has produced a series of unique store designs and catwalk sets for 25 years.

These include a runway surrounded by water for Prada's Spring Summer 2015 show and a portable, shape-shifting cultural pavilion in Seoul.