China is planning to build the world's first solar power station in space to provide "inexhaustible clean energy", according to reports.

Researchers at the China Academy of Space Technology claim they are already testing the technology and intend to build the station by 2050, according to an article in the Sydney Morning Herald.

The story quotes China Academy of Space Technology researcher Pang Zhihao as saying the technology would provide "an inexhaustible source of clean energy for humans" without interference from the atmosphere, cloud cover or periods of night time.

He continues on to say such a space station could reliably supply energy 99 per cent of the time, at six-times the intensity of solar farms on Earth.

The space agency is said to be currently building an experimental early model at a test site in the city of Chongqing. It will continue testing over the next 10 years with a view to begin building the station by 2030.

The need to provide energy for an ever-increasing population is a problem facing governments and businesses worldwide.

Recent efforts to reduce reliance on fossil fuels by multinational companies have included Apple's switch to 100 per cent renewable energy including for its stores, offices and data centres last year. 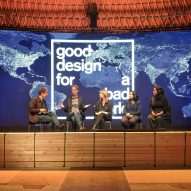 Solar power is an important element of this, with a rooftop solar panel installation covering Apple's distinctive ring-shaped headquarters in Cupertino, USA.

In a panel talk chaired by Dezeen at Dutch Design Week earlier this year, panellists called for "more science fiction" in our response to the threat of climate change and urged designers and policy makers to "keep dreaming big".

The concept of space-based solar power has been floated for decades, and has at times been explored by NASA.

Japan's Aerospace Exploration Agency is also on a quest to take the solar power plant into space and has made strides in advancing the technology.

One of the main questions over space solar power is how the energy would be transmitted back down to earth. China's researchers are said to be investigating using either a microwave or laser beam for the task.

A receiving system on earth would capture the transmissions and convert them to electrical energy to be put into the grid. 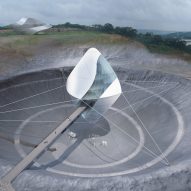 Japanese space research centre will be suspended over moon-like crater

Another enduring question over the technology is how to get the station up there in the first place. The weight of China's proposed plant would be approximately 1000 tonnes — more than double that of the International Space Station.

For that, the Sydney Morning Herald reports that China is exploring whether it can fabricate the station mostly in space, using robots and 3D printing. There has been rapid development of technologies in this field in the last few years, with NASA developing such a facility since 2013.