Artist Joe Sweeney has installed a phone box on the English coast that invites people to share their feelings about Brexit, in an interactive public artwork called +44.

The replica of a typical phone box is situated on Dungeness beach, an area on the southeast coast of England that voted in favour of the UK leaving the European Union.

Callers to a number on the project's website can "leave a message for Europe" expressing their feelings about Brexit. They can also listen to other audio testimonials that callers have left on the site.

"I hope to create a physical and poetic metaphor for the current, confused and uncertain climate," the artist told Dezeen.

The messages will form a permanent digital archive of public opinion "at this critical point in history". The artist hopes that individuals will feel they can contribute openly to the "neutral forum", at a time when national debate is increasingly polarised.

"The human voice is the most powerful form of communication, in which tonality is key," explained Sweeney. "By recording participants' messages for Europe, I want to capture the humanity of the general public, and the voices that I feel have been lost to the debate surrounding Brexit."

"I think it is essential we archive as many personal testimonials as possible, at this pivotal time for Britain and Europe. I believe this archive has an important role to play in our understanding of this moment as we experience it now, and when looking back in the future," he added.

The artist hopes that the archive will play a part in how historians and the general public understand this historical period in the future.

"I believe this archive has an important role to play in our understanding of this moment as we experience it now, and when looking back in the future," said Sweeney.

The phone box is modelled on a familiar British telephone box of the 1990s. It is lit internally, glazed in Georgian wire glass, and finished in rustable steel.

The exterior will physically change over time as it is exposed to the elements, acting as "a record of its harsh environment" in Dungeness, Britain's only desert.

"For me the phone box is one of those structures that's woven itself into everyone's psyche, lending itself to the nostalgic," explained Sweeney. 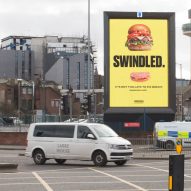 The phone box lights up at night like a beacon "standing at the edge of the UK looking out towards Europe".

Sweeney worked with local fabricators Dan Skee and AKW Design Studio to complete the structure. "It was produced in the same county as it is installed; I was really keen that this should be the case," he explained.

A live stream of the phone box will be broadcast on the website during the 28 days that it is installed on the beach.

"Over that period the sculpture will be subject to Dungeness' many different weather patterns, from clear skies to wild storms," said Sweeney. "I also wanted the weather to reflect the constantly shifting sands we're experiencing and the resulting sense of uncertainty that has been one of the inspirations for this project."

As Dezeen reported last month, creative leaders in the fields of art, architecture and design and the Creative Industries Federation that represents them signed a letter published in The Times newspaper calling for a second referendum on the question of whether the UK should leave the EU.

Photos are by Dan Glasser, courtesy of Cob Gallery.