Gary Hustwit speaks to Dezeen in a live Screentime conversation as part of Virtual Design Festival's collaboration with the filmmaker which also includes a free screening of his documentary about Dieter Rams plus exclusive photos of the German designer taken during filming.

Hustwit is a New York-based photographer and filmmaker. Today, he is offering Dezeen readers a free screening of his documentary about Dieter Rams, and is also sharing photos he took of the influential German designer during the film's production. 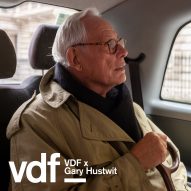 The 70-minute documentary, called Rams, is available on Hustwit's website today and throughout the weekend as part of VDF's collaboration with the director.

Released in 2018, Rams is the first full-length film about Rams, whose work for German electronics brand Braun has been hugely influential.

Previous design-related films by Hustwit include 2007's Helvetica, which explores the legacy of the iconic typeface; 2009's Objectified, which looks at people's relationships with objects; and Urbanized, which examines architecture and urbanism.