The modular furniture of influential German designer Dieter Rams is the focus of an exhibition at the Vitra Design Museum in Weil am Rhein.

The Modular World exhibition is billed as the first to primarily focus on Rams' furniture – as opposed to the electrical goods he iconically designed in his 40 years as head of product design for Braun.

Much of this furniture was produced for British furniture brand Vitsoe, which still manufactures several of the pieces, including the 606 Universal Shelving System and 621 Side Table.

Seating from his 620 Chair Programme – relaunched by Vitsoe in 2013 – is on display, alongside lesser-known designs, such as his 740 furniture system, based on Japanese sitting mats.

Many of the designs are modular. Pieces from new shelving systems are still compatible with shelves manufactured decades ago. The 620 series allows owners to fit different side or back panels, and create one-, two- or three-seaters.

"Perhaps even more directly than the Braun appliances, my furniture arose from a belief in how the world should be outfitted and how people should live in this artificial environment," said Rams, who started creating furniture in 1957.

"In this respect, each piece of furniture is also a design for a certain kind of world and way of living."

Rams focused on leaving technical parts of furniture visible, instead of hiding them behind cushions or wooden surfaces. Rather than creating pieces for specific rooms, he designed adaptable furniture that could be used flexibly in different living environments.

"What is absolutely impressive about Rams' furniture is that it offers real, functioning solutions for sustainable living, and the answer lies in the perfection of design, not recycling," said exhibition curator Heng Zhi.

"It is modesty and unspectacular design that Rams' furniture strives for – furniture that disappears once filled with objects and life, or in use by its customers."

Alongside the furniture, many of Rams pieces for Braun – like the SK4 record player, also known as Snow White's Coffin – are on display. The exhibition also includes photographs and recently filmed interview showing him discussing his approach to design.

Rams' Ten Principles of Good Design, which emphasise longevity over fashion, continue to influence contemporary designers and brands. In particular, his Braun designs are often cited as inspiration for the products of another technology icon: Apple.

"I would say that such elements as lightness, intuitive use and modularity, without which contemporary furniture and product design cannot be imagined of, are definitely important legacies of Dieter Rams," added Zhi.

Dieter Rams: Modular World is on show in the Vitra Schaudepot, a new exhibition space designed by Herzog & de Meuron at the Vitra Design Museum. It remains open until 12 March 2017. 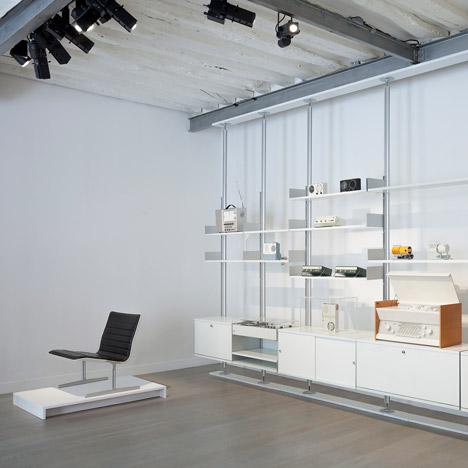