A "rampant cast of character-objects" that includes furniture, lighting and sculpture are displayed at artist and designer Misha Kahn's first solo show in Los Angeles.

Just Around the Bend, now on view at the Annex at M+B gallery in West Hollywood, includes a variety of new works that incorporate recognisable signatures of Kahn's style.

"Misha Kahn's practice is grounded in contradiction," said a statement from the gallery. "Rather than creating harmony between scale, function and materiality, Kahn zealously opts for discord, resulting in objects with constantly evolving personalities."

"For his exhibition at Annex, Kahn presents a rampant cast of character-objects, each one a unique manifestation of the artist's unbridled world view," the text continued.

Among these items is Tingle Tangle Mingle Mangle, a bronze desk with gloopy legs and extra appendages that appear to be partially melting.

Similar fluid forms are visible in the American Gothic chair and Around the Tree and into the Hole sofa, created around plywood and steel frames, and upholstered in multi-coloured cashmere.

Kahn's series of Puzzle Mirrors resemble abstract visages, with mixed materials used to add facial details and hair on and around the flat reflective surfaces. 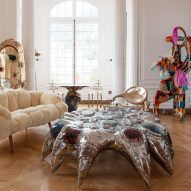 For a chandelier named Down the Road to the Right, the designer applied a grass-weaving technique he learned from artisans in Swaziland to produce a monstrous fixture that holds distorted blown-glass bulbs.

Fibrous tufts also sprout from Kokopelli Tattoo, an anthropomorphic lamp with a patchwork-patterned body and drooping glass bulbs that protrude from either side of its top.

A set of small lamps called Le Petit Prince look like stick figures with oversized bronze crowns, while the stainless steel table known as Back Bend Starfish Puts on all Her Jewels for Her Workout is covered in coloured glass spots.

"Endearingly absurd, each piece cunningly unveils its trickery while acting out Kahn's story of untamed design," said the gallery's statement.

Brooklyn-based Kahn, who studied at Rhode Island School of Design and Bezalel Academy of Art and Design, also presented works in a solo show at New York's Friedman Benda gallery in 2017.

The artist often uses found materials and debris to create his pieces, as demonstrated by his 2016 Scrappy Cabinet made from trash and woven grass.

More recently Kahn has unveiled jewelled tables and "animated" chairs at the Nomad Monaco fair, and produced a collection of barware and pool accessories for the Miami Beach Edition hotel.