Madrid-based Jorge Penadés tasked 14 international designers with creating objects no larger than a shoe box in this exhibition at Madrid Design Festival.

Called Extraperlo, the exhibition took place between 11 and 17 February 2019 in Penadés' warehouse-style home.

Designers were asked to deliver "bold ideas in small boxes", ranging from prototypes and models to one-off pieces made specifically for the event.

"It's very easy to impress people with big objects but it's a bit harder to dazzle the audience with small gestures," said Penadés.

"Extraperlo is based on risk. Experiments, exercises, hypotheses, discarded trials, essays, mistakes – everything is welcome," he continued.

Inspired by the Spanish word "extraperlo", which refers to the illegal trade of goods subject to some type of tax by the state, the exhibition aimed to recreate a small black market, where all the items on show were available to purchase.

"If a project gets sold the author will receive the full amount to refund the investment. We will not take a single euro for the Spanish government," explained Penadés.

Among the pieces was a model of a miniature wardrobe by Paris-based designer Marléne Huissoud, which is meant to resemble a cocoon. Made of clay, it has a round shape and a black, irregular surface.

"It is the fifth anniversary of my studio and I wanted to reflect on all the shapes and projects I did in the past. The little creatures [models] are a kind of library of what I have accomplished in the past five years," she said.

"Normally you make the models and then the final piece but for me, it's the opposite. I make the piece and then the models. I keep them as a statement of what I have done. It's just pure experimentation and a playful moment, to keep my practice as free as possible," she explained.

Another piece in the exhibition was a set of cutlery by British designer James Shaw. Titled Things We Touch Things We Use, the cutlery is made from stainless steel with amorphous-shaped handles made of high-density polyethylene.

Barcelona-based designer Nacho Alegre presented a brass lamp that has a long cylindrical neck and a lampshade made of a thin sheet of brass that has seemingly been crumpled against the bulb.

"I am attracted by a magnetic force towards an object, without any premeditation; then I am attracted to another object that when linked to the first produces a poetic shock," said Alegre. 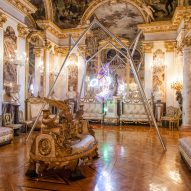 "Ever since I discovered letterpress printing in 2004, I have been amazed by the weight and precision of the modular components that are used to hold and assemble type together,"  he said.

"These modular geometric forms are called quads and are considered the negative space since they are not printed and are only used to hold the letters," he explained.

For his project, Fernando Laposse showcased a rechargeable torch, inspired by the "chunky proportions" of children's toys.

The designer fashioned the body of the torch using birch wood and made the light diffuser out of loofah, a material more commonly used as a natural scrubber to be used in the shower.

Penadés paired up with local designer Julen Ussia to exhibit a series of faceted, rectangular objects made from "polyclayrene".

The duo combined expanded polystyrene, which Penadés had leftover from an old project, with Ussia's medium of choice, clay.

"Even though the function is left to the user's interpretation, the result is a hybridisation between one of the most polluting materials in the world and one of the most natural," said the pair.

Madrid Design Festival took place between 1 and 28 February. Other exhibitions on show included one by Guillermo Santomà, who installed a series of sculptural and "transgressive" structures in the lavish interior of a baroque-style mansion in the Spanish capital.

Photography is by Geray Mena and IDC Studio.