Aaron Taylor Harvey studied cinema but his love of architecture led him into a job designing offices for Airbnb in San Francisco. In this interview for the Dezeen Jobs careers guide, he explains how he got there.

Harvey, who is executive creative director for Airbnb, had always been fascinated by architecture but was initially afraid it would involve a lot of maths.

After completing his undergraduate degree, he moved to Los Angeles and tried his hand at different lines of work, "just making sure that I didn't have to be anywhere at any particular time". But he eventually got back into the design industry, after following the advice of his father.

Although it was the peak of the recession, he found it easy to get work: "Fortunately, I had strong rendering skills that made me highly employable, even in that tough market," he said. 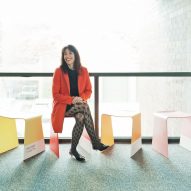 With his wife Rachel Harvey, he later co-founded an interior architecture studio. They worked regularly with Airbnb and designed its head office in Portland, before joining the company's in-house team in San Francisco.

Harvey believes there are plenty of opportunities for talented people beyond the traditional architecture and design firms, and encourages emerging creatives to broaden their net.

"I'm trying to figure out a way to get more architects and more interior designers to broaden their radar so they can be pulled in these other types of jobs," he said.

"You have so many options as an architectural designer, but if you aren't pursuing them, you're never going to see them."