The Bartlett School of Architecture has created a virtual reality tour of the Lin'an History Museum, designed by Wang Shu and Lu Wenyu's studio, which is yet to open to the public.

The Bartlett's virtual reality (VR) film allows viewers to explore the museum under construction at the foot of Gongchen Mountain in Lin'an, China. It gives hints of the traditional Chinese building techniques that are being utilised in the construction of the building designed by Amateur Architecture Studio.

The film formed the heart of the London-based architecture school's Spring 2019 Guest Exhibition, which offered an exclusive preview of the complex and included a collection of drawings by Wang Shu.

"Our challenge was to create an exhibition of a building halfway across the world, which is incomplete and not yet open to the public," exhibition director Chee-Kit Lai told Dezeen.

"We only had access to some site photos and a number of limited site visits," he continued.

"In consideration of the visitors' experience at an architectural show, we began by asking ourselves how to provide the sensation of being in the actual building through the use of drawings and models."

The solution was to combine two different technologies, photogrammetry and VR. Photogrammetry is a technology that is used to take measurements from photographs to identify the exact positions of surface points.

Combining these technologies with details from the drawings and photos of the museum, the school created a virtual, 3D landscape for viewers to explore.

"We had limited site access and time to record the building in order to create the photogrammetric 3D digital model," added Lai.

"Access was only granted to specific parts of the museum, mainly to the more complete buildings and defined landscapes. A detailed set of instructions was therefore sent from the UK team to our Chinese counterparts to capture the building using a GoPro film camera on specific walking paths." 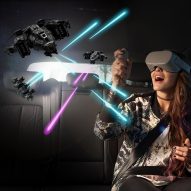 Using measurements from a series of stills taken from this film footage, the Bartlett made the complex 3D digital model.

It was then combined with VR software and converted into a stereoscopic format to create the final 360-degree viewing experience.

Weaving in and out of the Lin'an History Museum, the video alludes to the traditional Chinese materials and forms that will feature throughout the complex.

Meanwhile, narrow windows that feature in several other projects by Amateur Architecture Studio puncture the facades.

Subtle colouring in the video also emulates the characterful materiality of the museum, which is being created with the studio's signature use of wa pan – an ancient Chinese construction method that uses materials from demolished and abandoned buildings.

It will combine stone, brick and tiles to give facades throughout the complex a rich and variegated texture.

Amateur Architecture Studio also used the wa pan technique in one of its most notable projects, Ningbo History Museum, which has a facade composed of debris collected from the surrounding area.

In an exclusive Dezeen movie, Wang Shu explained why he chose to use recycled materials from traditional Chinese buildings to construct the Ningbo History Museum.