Shanghai furniture brand Stellar Works has for the first time launched products in China rather than Milan, unveiling pieces by Neri&Hu, Jens Risom and Space Copenhagen at the Design Shanghai fair.

The brand presented new designs by Neri&Hu and Space Copenhagen, plus additional reissues of mid-century pieces by Jen Risom.

The brand will launch further items at Milan design week next month, but its decision to unveil part of the collection in China is a first for the company and a vote of confidence in China's burgeoning contemporary design scene.

"It's the first launch for us in Shanghai because every year in the past we have always launched in Milan," said Stellar Works founder Yuichiro Hori.

"Milan is very important, but it's also important to say we are in Shanghai, that Shanghai is becoming international and that there's lots of design movement here."

As part of a long-running collaboration with Shanghai architects Lyndon Neri and Rossana Hu, who are the brand's creative directors, Stellar Works launched the Discipline sofa, Bund table and Cabinet of Curiosity: Dress.

The Discipline sofa features a horizontal wooden base that sits low to the ground on delicate metal legs, with a cushioned back rest and a buttoned upholstered seat.

The piece can be configured from a small two-seater sofa, up to a 20-metre-long bench, or placed back-to-back.

The Bund table is an addition to the existing dining chairs, stools and lounge chairs in the Bund collection, which is named after the well-known waterside thoroughfare in central Shanghai. It has a marble base and a brass top. 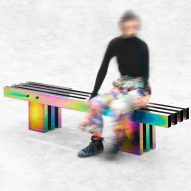 "The wardrobe rests on a metal trolley inspired by scenes from a ceramic factory, before the cart enters the furnace," Neri&Hu explained. "The furnace represents the trials and tribulations we all encounter in life, from which we offer up sweat and tears, pain and pleasure."

Stellar Works has completed its Slow collection by Danish design studio Space Copenhagen by adding a two-seater lounge chair, oval coffee table and a folding tray table. They are made from walnut and ash with leather upholstery and each has a pared-back silhouette with minimal decoration.

Along with the other pieces in the collection, the pieces are inspired by the chair Space Copenhagen designed for 108, a restaurant in Copenhagen.

The new additions to the collection by late Danish-American furniture designer Jens Risom include the reissued U430 armchair, first introduced in 1955, as well as a bookcase, a coffee table and a desk.

Other furniture collections on show at Design Shanghai include iridescent furniture by emerging Chinese design studio Buzao, and seating based on paper clips by Shanghai-based studio 8 Studio.

The fair, which has grown into China's biggest contemporary furniture and lighting event since its launch in 2014, ran from 6 to 9 March.