Furniture pieces by the Campana Brothers featuring cast bronze and aluminium animal forms are soon to be unveiled at Carpenters Workshop Gallery in London.

Inspired by mythological stories, the 13 surrealist furniture objects and sculptures are called the Noah series. They seek to tell the biblical story of Noah's Ark and communicate the idea that the ark was the origin of all species.

"Hybridism explores the Campana Brothers' sculptural experimentation, and their foray into the artistic realm of personal expression and societal commentary," said the gallery.

"Based in Sao Paulo, Brazil, the Campana Brothers, Humberto and Fernando, view themselves as hybrids."

In the past, the duo have commented that their creative process is driven by the diverse mixture of cultures, language and architecture that co-exist in their home city of Sao Paulo.

"Their studio, Estudio Campana, works in partnership with local communities, NGOs and factories to create pieces that celebrate the bright colours and rich textures of their native country," explained the gallery.

"Adopting an environmental ethos, the brothers utilise existing everyday materials, reinventing them in order to achieve simple solutions that do not compromise on their principles of aesthetic or design."

The seat was woven using a technique that the brothers developed with special textiles following a period of research into multidisciplinary materials and means of production.

Speaking about the bench, Humberto Campana said: "It demonstrates the material mix as well as the hybrid understanding of history, leaving the observer with a surrealist aftertaste."

Other pieces include a bronze wall table that looks as if it is being supported by a mass of intertwined animals while the Sereia Pirarucu lounge chair is made from Pirarucu leather, which is the discarded skin of a giant fish found in Amazonian rivers and lakes.

The chair's scaly appearance and bulky anthropomorphic form is a reference to mermaid mythology.

"This exhibition at Carpenters signals the growth of our work," said Humberto Campana. "Hybridism is part of our process of conception which involves a mix of materials with different forms, texture, sources and also techniques for creating the object."

"In the past, we have discretely used this technique, which was always the centre of our thought process. It is a reflection of the dystopic world in which we live and this dystopia moves us."

Over the past few decades, the studio said that it has heavily committed to research into materials, means of production, specialised techniques and traditional craftsmanship while always working closely with Brazilian artisans to preserve local traditions.

Hybridism runs from 22 March to 17 May 2019 at Carpenters Workshop Gallery in London.

Works by the Campana Brothers are part of the permanent collections at the MoMA in New York, the Centre Georges Pompidou and the Musée Les Arts Décoratifs in Paris, the Museum of Modern Art in Sao Paulo and the Vitra Design Museum in Weil am Rhein among others. 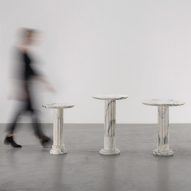 The Kaws x Campana collaboration includes two armchairs and a sofa with seats and backs made from soft toys.