New York City's Hudson Yards neighbourhood is finally opening to the public, so we've put together a guide to the skyscrapers, public spaces and attractions that make up the mega development's first phase.

Officially welcoming visitors from 12pm on 15 March 2019, the opening marks a significant milestone for developer Related's ambitious project – built over an active rail yard on Manhattan's West Side.

Areas opening this week include the retail and restaurant provision, the landscaped plaza and gardens, and the Vessel structure that sits at the centre of the site.

Related will eventually reclaim a total of 28 acres (11.3 hectares) of land by building sophisticated structural platforms over the train tracks, which incorporate a seven-foot-deep (two-metre) provision for elements like electrics, plumbing, planting and other services. 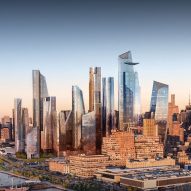 The site also boasts several protective features in the event of potential flooding or security threats, and includes its own power-generation system in case of a grid-wide blackout.

Construction work on the project began in 2012, and the collection of glass towers has emerged rapidly to fill a gap in the skyline.

Phase two of the development, named the Western Yard, is set to comprise several residential towers, and office block and a school. Construction of the second structural platform to accommodate these is expected to begin in 2020.

Some of the buildings in the first phase are still receiving finishing touches, but the majority of the complex is complete. Below is the list of the elements that comprise Hudson Yards phase one:

Number 10 was the first of the six skyscrapers to complete on the site in 2016, providing office space for companies including Coach, L'Oréal, Boston Consulting Group, and SAP in a building designed by Hudson Yards masterplanner Kohn Pedersen Fox (KPF).

Located at the southeastern corner of the site, the tower greets the High Line as the park bends around towards the river. A series of shifts in the building's floor plates were created during the design phase to accommodate specific requirements from different tenants.

Find out more about 10 Hudson Yards ›

The tallest of the neighbourhood's towers at 1,268 feet (386 metres), 30 was designed by KPF to "gesture" against its shorter southerly sister at number 10 by leaning in the opposite direction.

Mostly occupied by offices of companies like Wells Fargo, Warner Media and KKR & Co, the supertall skyscraper also boasts a pointy observation deck named Edge, which juts out towards the rest of Manhattan.

At 1,100 feet (335 metres) above the ground, the platform – including a vertigo-inducing glass floor section – will be the tallest outdoor viewing area in the Western Hemisphere and is set to open early 2020.

The Shops and Restaurants at Hudson Yards

Sat between and connecting KPF's two towers is the site's vast retail provision, housed within a comparatively low volume that includes seven floors of shops and restaurants, connected by concourses and atriums designed by Elkus Manfredi Architects.

A flagship three-storey Neiman Marcus department store anchors the offering of luxury brands, high-street chains, and variety of 25 food and beverage options. The Snark Park exhibition space by Snarkitecture is also intended to draw in visitors.

The building presents a simple flat facade to 10th Avenue, but offers much more glass towards the public plaza at the heart of Hudson Yards. Its faceted roof was given extra attention as it can be seen clearly from the surrounding towers.

Starting with a rectangular plan, the 88-storey building gently tapers into four curved portions towards its peak. The curtain-wall glazing appears frameless, reflecting the sky and surrounding towers.

Amenity spaces that accompany the 200-plus apartments are located on the 50th and 51st floors, and include an indoor swimming pool, a gym, spa, movie theatre, private dining room, lounge and other communal areas.

Find out more about 15 Hudson Yards ›

This expandable arts venue will bring flexible gallery, performance and events spaces to the neighbourhood when it opens 5 April 2019.

The project was conceived and designed by lead architect DS+R in collaboration with Rockwell Group, which used the base of their skyscraper as a nesting point for the cultural complex's service areas.

The Shed's architectural ingenuity revolves around its ETFE-covered moving roof, which can be deployed or retracted on its giant rollers in just five minutes, enabling the plaza in front to be become a covered concert arena or giant exhibition space.

Find out more about The Shed ›

SOM and architect David Childs' contribution to Hudson Yards is this 92-storey skyscraper that will accommodate 143 condos, and the first hotel from fitness brand Equinox – including 200 rooms, and a club and spa.

The tallest residential tower on the site is clad with vertical limestone fins, which accentuate the various setbacks in its form, and curve near the base to mark the entrances. Construction work is almost complete, and residents are due to begin occupancy later in 2019.

Visitors with timed free tickets can scale the steps, or take an elevator straight to the top, for views into the central chasm or out to the surrounding glass towers, and landscaped gardens designed by Nelson Byrd Woltz.

The structure is temporarily known as Vessel, until a public competition to find a permanent name comes up with winner, once it opens along with the other public spaces on 15 March 2019.

Find out more about Vessel ›

This Foster + Partners tower is only constructed up to grade so far, but will accommodate 2.9 million square feet (270,000 square metres) of office space once complete in 2022.

The design of the 985-foot-tall (300-metre) tower includes glass and white stone cladding, and a terrace where the cuboid volume steps back around halfway up.

Situated beside the subway stop for the 7 line, which connects Hudson Yards to the city's transit network, the building is intended to be "highly permeable at ground level" and include a variety of sustainable features.

Find out more about 50 Hudson Yards ›

KPF's third skyscraper in the development, and the last on this list, provides 1.3 million square feet (121,000 square metres) of flexible office space opposite Foster's tower.

A strict ironwork grid that references the architecture of Soho frames the floor-to-ceiling glazing, and several outdoor spaces are offered up the building's 780-foot-tall (238-metre) sides.

Construction work on 55 Hudson Yards completed in October 2018, and tenants have begun moving in.