Clear Channel and design studio Affairs have created The Emotional Art Gallery which uses the real-time emotions of commuters to replace adverts with artworks.

This information was used to project one of six artworks that expressed an opposing emotion – happy, energised, calm, safe, peaceful and loving – across 250 digital screens, in a bid to change the public's mood.

Outdoor media company Clear Channel, who own the digital billboards across the Swedish capital's metro and train systems, worked together with local design studio Affairs to commission the artworks after research found that Stockholm's population is the most stressed in Sweden.

"This is a trend which applies in many cities across the globe where metropolitan communities experience stress during their travel to work, particularly in high-intensity environments such as metro systems," said Clear Channel.

"The Emotional Art Gallery is an emotion-triggered art experience, a unique way of curating and displaying the work of artists from across the globe," said Antonia von Euler-Chelpin, founder of Young Art, a platform for emerging artists that advised on the selection of artists.

"Imagine walking into a museum where the entire exhibition is adapted in real-time to make you feel good," she explained.

"The selected artists represent an emerging generation of creatives that primarily work in new digital mediums. For them, a screen like this is a very natural canvas," she continued.

Lindborg, for instance, created an animation of a marble statue cushioned by colourful simulations of pillows and foam pieces, to embody the feeling of being safe.

Another example is Wannerstedt's "hypnotic" animation of three rotating tubes of colour that move together "in perfect harmony", intended to evoke calmness, while Mexican artist Blizzard made a playful animation featuring flashing shots of cake to convey happiness. 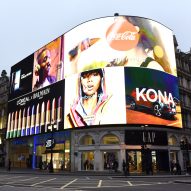 To evoke a feeling of love, Mottet and Severin chose a playful animation with bright pink, geometric shapes, while Sie's energising animation featured a series of gold and orange floating blobs.

Finally, to illustrate peacefulness, Janicki created an animation of rock piles in a placid pool of water.

The project, which stretches over an area of 110 kilometres of track, is the largest-scale exhibition showcasing digital art in the world, according to organisers.

"All companies follow current news events and trends as research for their communication. So, we thought why not use this type of real-time data as a new kind of creative input, whether this is through art or advertising," said Clear Channel chief content officer Finn Wikander.

"It makes the content more relevant and, in this case, better adjusted for spreading joy, energy and love to the commuters," he continued.

The Emotional Art Gallery was on show on digital billboards across Stockholm's metro and train systems between 7 and 24 March 2019.

In 2017, a digital billboard was installed in London's Piccadilly Circus that used recognition technology to display targeted advertisements based on the make of passing cars, and the gender and age of pedestrians.