The designer warms slices in the steam box and then bends each individually over a structured frame, so they gradually vary in shape to form the sinuous designs.

Due to this rigorous, time-consuming process, Se Hwa typically produces two to three of his steam-bent creations per year. R & Company selected seven "iconic" designs produced between 2010 to 2019 for its exhibit, which shows them all together for the first time.

"Se Hwa's exhibition at R & Company has been years in the making," said R & Company co-founder Evan Snyderman in a project statement."Each piece is a celebration of beauty and craft."

For Steam Bent Series lounge chairs, Se Hwa has curved the wood to form curved nooks and backs for comfortably sitting down.

Designs are differentiated by their bases, with the Steam 25 chair curving inwards underneath and the Steam 15 version extending to form a bench.

Similar to the design of the chairs, the Steam 20 bench has a wavy profile that marks two seats, while Steam 10 bench features a more gentle dip in the middle. 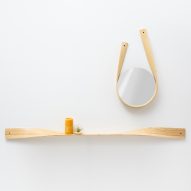 A more intricate design for the Steam 18 desk involves a series of rounded structures that overlap and fold over one another.

Se Hwa, who solely focuses on steam bending in his Seoul studio, is among a number of designers that have experimented with the technique to shape wooden furniture and homeware.

The exhibit follows the gallery's presentation of works by artist and designer Sebastian Errazuriz, which included a crystal chandelier tangled with 100 colourful stuffed birds and an unfurling wooden cabinet.