Glossy green paint coats the bottom half of this bright white restaurant in Athens, which design studio AK-A has finished with deep red accents.

Lollo's Atene has been designed by AK-A with "simple, fresh, and wholesome" interiors that match the rustic Italian dishes offered on the menu.

The restaurant, which has another branch on the Greek island of Antiparos, occupies a 1950s residence in Chalandri, an up-and-coming suburb in north Athens populated by a growing number of cafes and cocktail bars.

Over the years the property had been host to a variety of businesses and therefore had a number of fixtures leftover from previous fit-outs. The studio stripped these back to expose the building's original surfaces.

"Our aim was to reveal, rather than hide, the complexity of this structure, and to assist its coexistence with our new interventions," explained the studio.

Rough stone walls on the upper half of the main dining room are now bright white, while everything below the window sills has been smoothed out and covered with glossy racing-green paint.

This duality of colour has been recreated on some of the green dining chairs that have white-tipped seat backs.

"Through this chromatic uniformity, the complexity of the elements is simplified. The strict dichotomy of the space gives the diners and the dishes served a prominent role," said the studio.

"Intense contrasts are created by simultaneously concealing and revealing the building's textures and materiality – we juxtapose the smooth with the rugged, the dark with the light, the glossy with the matte, the present with the past."

A further splash of colour is offered by the star-shaped wall sconces that have been dotted around the restaurant's perimeter, which are composed of rust-red metal tubes topped by exposed lightbulbs.

The same shade of red has been applied to a shelving unit that openly displays drinks bottles, and the gridded framework of the mottled-glass window which separates diners from the kitchen. A couple of panes of glass have been left clear so that diners can catch glimpses of the chefs at work. 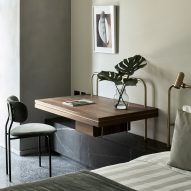 Red and white aggregate also appears in the terrazzo countertop of a large circular table that has been placed in the nook of the room's bay window. Diners can also opt to sit up on the restaurant's mezzanine level or out in the garden.

Other hospitality hotspots to open in Athens in recent months includes the Perianth Hotel, which boasts Neo-modernist interiors designed by K-Studio, and an art deco-style rooftop bar by Fluo that features marble surfaces and gold-inlaid walls.

Photography is by George Messaritakis.