Twins Simon and Nikolai Haas designed the Wild Things collection in collaboration with luxury homeware brand L'Objet to draw on "the otherwordly landscape" of Joshua Tree National Park in the dry Mojave desert.

Following in the design duo's fantastical style – which includes a set of animalistic silverware – the pieces are conceived as creatures that could live in the extreme landscape.

"The dinnerware is embellished with whimsical motifs from the Mojave desert, setting the scene for the fantasy behind the collection," said the Haas Brothers in a project description. 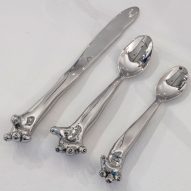 Among the works is the Second Skin Vessels Series, which comprises stout porcelain containers modelled on various creatures, including a fish, a turtle and a "coral monster".

Each has a stout body set on chunky legs, with the porcelain shaped to look like fur or bubbly skin and painted in bold colours that resemble stripes or scales.

"In order to survive the punishing conditions of the Mojave Desert, the most resilient of creatures from the Haas monster family developed a magical second skin," said the studio.

"Forming protection from the harsh sun and bitter nights, they glimmer by day and pulse by night."

The series follows on the fantastical style that the Haas Brothers have become known for.

Previous designs have included the silverware the duo designed for art collector George Lindemann Jr and a family of sheep-sized creatures covered with patterned beadwork.

To make Wild Things, Simon and Nikolai Haas first modelled the designs in the LA studio, creating 3D-printed models of each creation that were then transported the L'Objets's atelier in Portugal.

These were then used to inform hand-made prototypes to create moulds into which the porcelain was poured and cast.

The correlation between the desert and the design of the collection is then depicted in the collection's styled and collaged photoshoot, as directed by Michael Reynold.

For example, one image imposes the candlesticks topped with golden palm tree leaves against a backdrop of trees, while another shows the magnifying glass as an extension of a tree trunk.

The Lazy Susan resembles a large bug laid on its back with arms and legs splayed, while the Mojave Desert bowl is detailed with white, bubbly markings. In the photo set, the bowl rests on a large stone with a similar texture.

Photography is by Elio Tolot, courtesy of L'Objet.