Paw-shaped cutlery pieces appear to be attempting escape from their sculptural base, as part of this design that LA duo the Haas Brothers created for art collector George Lindemann Jr.

Lindemann commissioned twins Simon and Nikolai Haas to create the silverware for use at his family home in Miami Beach's Sunset Islands.

Each of the 144 knives, forks and spoons in the George II set is cast as a whole, and features a four-digit paw with tiny claws on the end of the handle.

"They're beasts, with some amount of sexual innuendo – like always with [the Haas Brothers]," Lindemann told Dezeen during an interview in Miami last week.

When not in use, the silverware is stored in a console with a wooden top and equally animalistic brass legs.

The items rest in individual holes so that they poke up vertically, claws in the air. This gives the impression that they are fighting their way out from captivity.

"This came back as just one of their brilliant ideas," Lindemann said. "It works as well as sculpture as it does as silverware."

"They're all different heights, and they're all trying to get out from in there," he added. "So even when we're not using the silverware, I really enjoy it."

The George II set is titled as a play on George III decorative antique silverware from 18th-century England, along with the name of its commissioner – whose father is also George.

The end result came about after a long search for a designer who could make cutlery that was out of the ordinary. 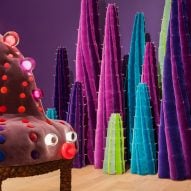 "Any colour is fair game" at the Haas Brothers' Ferngully exhibition

"For about 10 years I was trying to get someone to make me some silverware," Lindemann told Dezeen. "I spoke to a lot of really talented and successful people, and everyone had the same idea."

"They'd make the handle and get a stainless steel end piece," he continued. "But that's not what I wanted, because anyone could have that. I got that in my head."

After asking some of design's biggest names to no avail, he then turned to then-emerging duo the Haas Brothers, who spent five years working out how to produce their idea.

"They did the design, and that was the easy part," said Lindemann. "And then when they had to go figure out how to make it, and that's when all hell broke loose."

"Initially it was a relatively frustrating commission because we were like 'f*ck, cutlery is hard as sh*t'," Nikolai Haas told Dezeen. "He was like 'it has to work' and we were like 'ugh it has to work?!' We were kind of spoilt brats about it."

Eventually, the duo found a manufacturer in England that could fabricate the utensils, which feature hollow tubes in their centres to reduce the weight.

The cutlery and its base sit in his eclectically furnished dining room, beside a dining table by Paris design Mattia Bonetti, and surrounded by artworks by the likes of Jeff Koons, Damien Hirst and Wendell Castle.

Part of a wealthy American dynasty, Lindemann serves as the general manager of real-estate company BC Property Investments, as well as the president of the board of directors for The Bass Museum of Art.

The recently renovated museum in Miami Beach is currently hosting the first retrospective exhibition of the Haas Brothers' work, which opened to coincide with Miami art week earlier this month.

Titled Ferngully, the show features several examples from the brothers' series of beasts, as well as new larger-scale works. The Haas Brothers credit Lindemann with helping them to secure the exhibition, having built up a professional and personal relationship over the years.

"As collectors go, he's one of the most progressive, forward-thinking people I've ever met in my life," said Simon. "He really cares."

"He made us grow so to make [George II], and there's so much locked into it," added Nikolai. "I love that thing so much, I'm really proud of it."