Bioplastics could potentially be worse for the environment than conventional plastics, according to recycling expert Arthur Huang.

Switching to plastic made from plants instead of fossil fuels would require vast amounts of farmland, Huang said. This could cause environmental problems and deprive humans of food.

Huang, founder and CEO of circular-economy engineering company Miniwiz, added that bioplastics can cause damage when they are composted. They make soil and water more acidic, he claimed, potentially polluting both land and ocean.

"If we use them the same way [as conventional plastics] they are just as bad if not worse," he said. "They change the pH value of soil and water as they degrade, and they take away valuable food supplies," he said.

Huang cited a United Nations report from 2015 that raised concerns that the public would recycle less if they thought the plastic they used would harmlessly degrade if discarded.

PLA is compostable, not biodegradable

An architect and engineer, Huang has pioneered techniques for recycling plastic. In 2017 he collaborated with Nike to design sneaker packaging made from recycled drinks containers.

Polylactic Acid (PLA), the most common type of bioplastic, is made from fermented starch extracted from crops such as corn, potatoes or sugar cane. It can also be made from algae.

PLA is compostable, meaning microbes will break it down harmlessly into biomass and gas within a few months, given the right conditions. They are not biodegradable, since under normal conditions they will break down just as slowly as conventional plastics.

However since PLA is an acid, it will raise the acidity of its surroundings as it composts, according to Huang.

"It's like us dumping lots of orange juice into the ocean, or the mouth of a river," said Huang.

Huang made the comments at the judging of the Ro Plastic Prize in Milan last week, during a jury discussion about the relative merits of bioplastics and fossil-fuel plastics.

The competition, launched to encourage the recycling of plastics, saw prizes awarded for products, fabrics and innovations.

Huang challenged the idea that bioplastics were inherently better than plastics derived from fossil fuels. 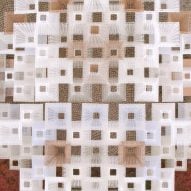 Conventional plastic that gets into the soil or the ocean is largely an aesthetic problem, he argued, since it is non-reactive and causes no physical harm to ecosystems. The argument could even be made that plastic waste is an effective method of carbon storage, since it is difficult for conventional plastic to break down enough to release its carbon.

"It's non-reactive; it doesn't break down," he said. "It's solidifying carbon in a way."

However compostable bioplastics do break down completely, meaning "you turn an aesthetic problem into a chemical problem."

Architect Arthur Mamou-Mani contested Huang's statements. "It's a very, very clean material," said the French architect, who built a pavilion out of 3D-printed PLA for fashion brand COS as part of Milan design week last week.

"It's 68 per cent more carbon efficient in terms of carbon emissions than conventional plastic. It's 50 times less toxic when it comes to fumes, which is very important when you 3D print it in your office."

Mamou-Mani disputed the claim that composted PLA lowers the pH value of water or soil, making it more acidic. He cited an experiment where lettuce plants had been grown in PLA compost. "They tested the acidity and the salad was perfectly fine," he said.

To turn PLA into compost, "you need to put it in an industrial composting facility," Mamou-Mani said. "You need 60 degrees Celsius and 100 per cent humidity and then it decomposes within a month. You can put them in a home composter and then it takes about six months as the temperature is a bit lower."

A better solution is to recycle bioplastics instead of composting them, Huang said. "If we switch the name and recycle it seriously and stop single use, that could be a good solution. Single-use is where all the problems begin."