Artist Antony Gormley has teamed up with astrophysicist Priya Natarajan on a virtual-reality experience that allows users to walk on a digital version of the moon created using data from NASA.

The 15-minute immersive experience sees visitors don a virtual-reality (VR) headset to travel from an imagined version of Christmas Island in the Indian Ocean, through the earth's atmosphere to the moon, where they can walk across its surface.

On the way, they pass through the stratosphere and around virtual asteroid belts before eventually travelling from the moon on towards the sun.

"Our nearest neighbour is the moon, and this project allows us to experience it as a found object in space, to explore its vast open spaces and swoop the ridges and valleys of its craters," said Gormley.

"This collaboration is an opportunity to experience the mind/body relationship in a new way and consider our own body's relationship to other bodies in space."

Surface of the moon digitally recreated

Produced with Acute Art, a virtual and augmented reality production studio that specialises in creating digital artworks, the experience takes place in a room kitted out with five VR headsets at The Store X's space at 180 The Strand in London.

Using a hand-held gaming stick and the movement of their own bodies, visitors are able to move across the moon's craters, and experience the weightlessness of bouncing on its surface.

"This year we celebrate the 50th anniversary of the moon landing. Only 12 human beings have walked on the moon to date, but many unmanned missions have provided comprehensive high-resolution maps of the lunar surface," said Natarajan.

"We can experience walking on the moon, feel the sensation in our bodies and minds of stepping on the surface that has been so intricately mapped with data that space missions have provided," she continued.

The team used multi-scale modelling to recreate everything from the blades of grass on Christmas Island to the vast celestial bodies.

According to the team, one of the hardest aspects was to create an optic sense of the real size of an object in relation to the cosmos and the visitor's own body. 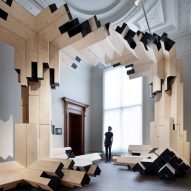 "Having had some experience of virtual reality, it was clear to me that the technology was better at evoking space than it was at describing objects and I began to consider the possibility of making the body into a spaceship, which could explore the cosmic realities at the heart of Priya's research," said Gormley.

"I love the idea of extending the body's capability and allowing it to travel at many times the speed of light."

The team sees the title of the work – Lunatick – to be a warning that our future is dependent on the continued life of the biosphere. It aims to highlight the role the technology can play in drawing these issues to the attention of the general public.

"What thrills me most about Lunatick is how the combination of data, imagination and the latest technology can succeed in powerfully conveying how we as a species occupy this paradoxical place in the universe – we are simultaneously significant and insignificant," said Natarajan.

Technology could "help us find our place in the universe"

"Strangely, it is technology that brings this into sharper focus better than any other medium. Maybe ultimately technology will help us find our place in the universe and become more responsible guardians of our precious home," she continued.

Acute Art has worked with a number of different artists to create virtual-reality experiences that straddle the line between technology and art.

Other studios to do so include Tin Drum, that worked with Marina Abramović to create a digital mixed reality rendering of the artist that dissolved into blue dots for visitors wearing a spatial computing device called Magic Leap One earlier this year.

Lunatick is on show at 180 The Strand in London until 25 April.