Paul Flowers, chief design officer at INAX, explains how the brand's exhibition at Milan design week demonstrated the role of water in Japanese culture, in this video produced by Dezeen for the bathroom manufacturer.

"What we've tried to create here is basically a brand journey," says Flowers in the movie, which was shot by Dezeen in Milan.

Visitors first passed through a multimedia exhibition describing the Japanese population's cultural relationship with water through text, exhibits and video.

The exhibition featured a collection of historical ceramics, including an ornate blue and white toilet from the Meijii era – a period of Japanese history from 1868 to 1912 – and an early shower toilet developed by INAX.

The S600 range was exhibited on an elevated platform made of cypress wood enclosed by a strip of gravel resembling a Japanese rock garden, with a large bonsai tree emerging from the centre.

"The S600 line is overtly Japanese in expression," said Flowers. Items from the range displayed in the installation included a shower toilet, a bath, a sink and a shower, which were flanked by walls adorned with INAX tiles.

The S400 collection was displayed in a separate installation, in which a shower, a toilet and two sinks were situated in a bathroom environment framed by moss-covered stones.

"There's actually a real peaceful harmony, quite a Zen feeling for that space," said Flowers.

The exhibition culminated in a room showcasing the brand's range of ceramic tiles, with wooden shelving on the walls holding bottles of pigment used to colour the tiles, and boxes containing individual tile samples.

Next to these shelves, a series of trays displayed along a countertop presented tiles arranged as if part of a traditional Japanese meal, accompanied by a piece of paper with explanations about the products made to look like a menu.

"The role that tiles play in Japan is really unique, and when you see these tiles displayed in this way I think you start to see the beauty and the texture and the depth that consumers haven't been exposed to in the rest of the world," Flowers said.

According to Flowers, the aim of the exhibition was to reposition the brand in the context of the global forum of Milan design week. "INAX is a very well known brand in Japan, but it's not so well known outside," he said.

Flowers went on to claim that other countries had much to learn from Japan's wellbeing-centric approach to bathing and bathroom design.

"There's definitely a need and a desire for this in other cultures," he said. "People are busier than ever, and these spaces – which are quite Zen, quite relaxed, quite calming – are going to become more and more important in one's home." 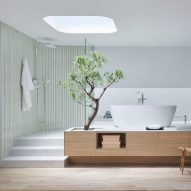 "For INAX, design has always been about starting with the human element," he said. "Where we try to first understand the human user experience, translate that back into design and then the technology goes to support that."

According to Mohan, holding the exhibition during Milan design week represented a chance for INAX to announce itself as a player in the global design community.

"This brand has been too humble, and there's no better way to say that you're rubbing shoulders with the best of design and brands than here at Milan design week," he said.

Dezeen filmed this video for INAX in Milan. Rituals of Water was open to the public at SuperStudio, Via Tortona 27, Milan from 9 to 14 April.