Designers are responsible for improving sustainable practices across the industry, according to British designer Ross Lovegrove.

Lovegrove believes it is designers, rather than brands, that need to set an example when it comes to environmental responsibility.

"If you're a known name in the design industry I think it's your duty, I think it should be part of the whole circle of what you do," he said.

The designer spoke to Dezeen during Milan design week at a launch event for Ergo, a furniture collection for Natuzzi that is made using renewable and recyclable materials.

He said he was drawn to working with the Italian furniture brand because he felt the company would be open to his ideas about making the furniture industry more sustainable.

"I don't design furniture very often and I'm not interested in just doing another L-shaped sofa," he explained. "I wanted to come in and try to facilitate a change in mindset. Natuzzi is a big company with young blood and they are open to doing things differently."

The Ergo collection comprises a range of items for the bedroom that are designed and manufactured with sustainability in mind. Lovegrove spent three months researching materials to identify natural options that also provide the necessary performance.

The frames for the furniture are constructed using wood from FSC-certified plantations, which is slotted together to prevent the need for additional metal fixings. Any adhesives used are water based and formaldehyde free, and the surfaces are finished with a natural wax.

All of the upholstery is produced using organic textiles, including linen, wool and cotton. The mattress for the bed is made from 100 per cent natural latex and is upholstered in a hemp fibre.

Included in the collection is a chandelier featuring LED light sources capable of rendering different colour temperatures that can be adjusted throughout the day to match the user's circadian rhythm.

Lovegrove explained that the forms used for the various products are an evolution of the organic style for which he has become known. His previous designs have included a curvaceous wooden chair for Bernhardt Design and a pair of OLED lamps that resemble underwater creatures.

The Ergo collection's fluid forms are intended to evoke shapes found in nature which, in the case of the chaise longue in particular, were adapted to fit the contours of the human body.

"In my case, when I work with organic form, it's because organic form is incredibly honest, it's very reduced," the designer told Dezeen.

"It's based on a two-dimensional form that fits your spine line. If I was to do any more with the form I'm not sure it would have made it better – it's a spine line with the minimal thickness it takes to become structural."

Sustainability was a key topic at this year's Milan design week, with many designers and brands addressing issues such as waste, climate change and the need to reduce our dependence on plastics.

Lovegrove sees the Ergo collection as a positive step towards demonstrating how ecological materials and processes can be applied in ways that still fulfil the demands of a discerning clientele.

He said he plans to pursue more projects that have a positive impact on the planet, as he believes the industry has to change.

"I'm involved with industry and industry is good and bad," he admitted. "Unless we start reducing the sheer scale of stuff we're producing I think we're going to have some real problems." 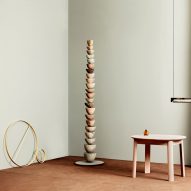 Architect Arthur Mamou-Mani used a 3D-printed bioplastic to create his installation for fashion brand COS, while gallerist Rossana Orlandi organised a competition that challenged designers to develop new ways of recycling or reusing plastic.

Elsewhere, Italian architect Carlo Ratti created a series of arches grown from a fungus that is being returned to the soil, and Barber & Osgerby designed a chair for Emeco made from a special plastic that can be endlessly recycled.

Ergo was one of two ranges that Natuzzi launched in Milan, along with Dandy by Marcel Wanders, a series of furniture that celebrates the traditions of Puglia, the region where the brand was first established.

Natuzzi is celebrating its 60th anniversary this year. Creative director Pasquale Junior Natuzzi said that, rather than looking to its archive like many brands do when commemorating a significant milestone, he wanted to focus on the future.

"We want to celebrate these 60 years using our origins as a starting point to look into the future," Natuzzi explained.

"Natuzzi has a strong bond with its homeland and its extraordinary resources," he added. "This feeling inspires us and encourages us to look at nature with respect and devotion, translating this into organic design and ethical production."