Lovegrove has created the pair of lights for LG Display. Both are designed to take advantage of the flexibility of the brand's OLED panels – a type of lighting that creates illumination across a surface rather than from a point.

The first, called Pyrosome, is based on a deep-sea creature of the same name.

Created using 3D printing technology, this light is made up of several elements, each with a freely transformable shape. This allows them to be moulded in different directions.

Lovegrove said his aim was to combine logic and beauty into "an ethereal phenomenon".

"I want the audience to break free from typical perceptions and feel that light, in its essence, has a organic presence beyond the known," he said.

The second light is called Medusa. It comprises eight flexible OLED panels that extend out from a central ring, and can be bent into different shapes.

"With Medusa I have found a sincere way to hold a series of [panels] inside a loop so that the strips, via gravitational forces, assume a shape," explained the designer.

"To change these shapes, I use different weights at their tips to promote more or less flex."

"The resulting affect is like plankton floating in the ocean, as light and form are one," he added. "Light becomes gently animated without employing additional energy."

LG Display will showcase the lights at Euroluce during Milan design week. They will be on show in Hall 15 from 4-9 April 2017, as part of the brand's exhibition, called The Light of Inspiration.

Along with the two lights, LG Display will also showcase some of the properties of its OLED light panels to architects and designers.

As well as being just 0.41 millimetres thick, these flexible, lightweight panels generate no heat, UV or Blue Light. They are also shatter-resistant, thanks to being plastic-based.

"LG creates OLED panels that are thin, lightweight and cool to the touch. My concepts reflect these physical properties." 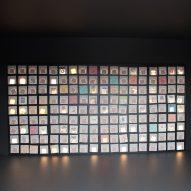 LG Display has previously partnered with other prominent designers on its products. Ron Arad created an artwork of OLED light panels for last year's London Design Festival, while other past partners include Jason Bruges, Grimshaw and Ab Rogers.