Shards of discarded marble are combined with resin to form this angular furniture collection by South Korean office Fict Studio.

Called Fragment, the collection includes a stool, chair, side table and tray, and aims to address the problem of industrial marble waste.

The furniture items feature rectangular volumes of grey marble and orange-brown resin that intercept at right angles to form geometric yet minimalist structures.

The trays are made of a singular rectangular slab of marble and resin with a frosted finish.

The Seoul-based studio was asked by local marble manufacturer Total Marble to find a use for the nearly 2,000 kilograms of broken marble slabs discarded daily as industrial waste. 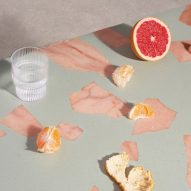 Altrock is a terrazzo made using waste from the marble industry

"There is no marble produced in Korea, all of it is imported from abroad so the pieces damaged during the shipping process and the leftover marble fragments lose their value because the pieces are too small to be used, despite the high cost of the material," said Fict Studio.

"In order to solve this problem, we decided to rethink the way we use marble fragments," explained the studio.

The designers wanted to utilise the discarded material while also showing the "unique beauty of marble".

"Marble fragments are still natural and beautiful. The Fragment series is an attempt to reassess the value and use of fragmentary pieces leftover from the marble-making process," said the studio.

Slabs of broken marble were placed into rectangular moulds and the resin then poured over, before being left to harden. These pieces were then attached to one another using adhesive glue.