With Coachella now over, Aaron Betsky questions the value of the festival's temporary sets and large-scale installations, and if the strain that their construction and destruction places on the planet is worth it.

The Coachella Festival is a great place for experimentation, both in music and architecture. The question is whether it means anything.

This year's edition, which featured Kanye West's Easter Sunday marriage of street-born hip hop and gospel traditions, Christine and the Queens badly channelling her inner Twyla Tharp, Childish Gambino recalling MTV and using the latest computer-mapping technology to make it 3D, and a raft of other old-time riffs combined into dub tracks, also recalled the 1980s moment in architecture carried out not so much with new technology, as with an even more thoughtless insouciance.

Architecture, in other words, is still lagging behind music in trying to figure out how to make the familiar new and the new familiar.

Coachella has set itself apart in recent years by commissioning young firms and artists to create site-specific installations for the two consecutive weekends in April it occupies the former Polo Club grounds in the Indio – halfway between the resurging mid-century resort of Palm Springs and the grittier agricultural and retirement communities further to the east.

Although there were some holdovers from last year's edition, including most notably Newsubstance's Spectra – a rainbow-coloured ramp to nowhere, there were a few fresh gathering spots as well.

The most selfie-friendly spot – and Coachella is nothing if not about showing your network you are there – was undoubtedly Office Kovacs' cactus forest, Collosal Cacti. A collection of pastel-hued branching vertical elements, it was meant both to provide shade, of which there was precious little, and to act as a marker within the sprawling festival grounds. 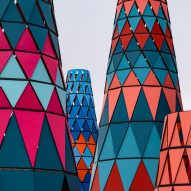 Tall enough that you could see it from afar, but also providing ledges on which to lie or sprawl on or against, it became Coachella's user-friendly version of the clock in Grand Central Station.

It also reminded me of nothing so much as the oversized letters, abstracted palms, and pastel pastiches of classical elements the late architect John Jerde and the late Deborah Sussman used to help you find your way around the 1984 Los Angeles Summer Olympics.

The colours there – so different than anything around them, despite the designers' claims to being picking on a SoCal aesthetic – and their assertive shapes not only created moments of recognition whether you were in Crenshaw or Pasadena, on the beach or far inland, but also made the whole event seem to be coherent and compact when you saw it on television.

The difference now, of course, is that this event collapses on your networked handheld screen, rather than the family boob tube.

Everything at Coachella has to be multicoloured

More effective was the campground of tents, Sarbale ke, or "celebration", that the Burkina Fasa-born and now Berlin-based architect Diébédo Francis Kéré erected in the vicinity.

Equally evocative of the Rainbow Nation, but perhaps reflecting the colours of either the cloth of his native country or the neo-hippie outfits that are Coachella's equivalent of the suit and tie, these teepees consisted of stretched diamond-shaped panes rising up from splayed bases to round openings.

They acted as less hokey markers, but also served as gathering spaces. In tune with Coachella's tribal, non-binary, and fluid sociality, they always seemed to be home to various groupings of people, more or less loosely affiliated and more or less in communication, whether physically or verbally, as well as to a few outliers just staring up into these three-dimensional kaleidoscopes.

The most successful of the largest installations, and that were plenty of small, mediocre ones, was this year's version of the Do Lab. The creation of three brothers, Jesse, Josh, and Dede Fleming, who inherited their festival-going and camping ways from their parents, the Do Lab consists of a tent that each year tries to stretch Buckminster Fuller's principles ever further into lozenges, fractured domes and even blobs.

They are in essence giant versions of the camping tents, whose modern forms are the result of Fuller inspiring young outdoors enthusiasts with his lectures at Berkeley. Produced by companies such as North Face, they are blown up and pulled apart to house several thousand festival goers.

The music the Do Lab hosts tends towards various form of electronic dance music and other mix-based work, but with forays into live performance: I caught three long-haired guys, dressed all in black, including their sombreros, enhancing their mix with live autoharp, guitar, and a drum set.

The brothers designed the arched tent along with a crew that included a few Southern California Institute of Architecture graduates. Smaller than most of the other tents, it expresses its structure with joy and forthrightness, while continuing the notion that everything at Coachella has to be multicoloured by painting the canvas fragments of tetrahedrons in a rainbow of colours.

This year, the columns were also meant to light up to enhance the effect, but unfortunately, they were not working when I was there.

I also liked the kludged-together forthrightness of the tent's detailing, especially the connections the design and construction team welded together after their computers and engineering consultants told them what need to fit with what. The Do Lab felt like what I expected Coachella to be: a festival of experimentation in all kinds of media integrated around the communal enjoyment of music.

The biggest problem with Coachella is that it all goes away after two weeks. The lack of permanence is what allows the festival to be so big and the structures to get away with some moves that might not otherwise pass code.

The ephemerality, of course, also gives the place a kind of charm – in a blink of an eye, all that remains is that selfie, unless it is Beyonce's documentary, Homecoming, in which she shows how she spent over $6 million (£4.65 million) creating such a single performance.

The real permanence Coachella and other festivals like it should offer is serving as testing grounds for ideas, forms and technologies. Because so much money comes together with such minimal requirements for so many open-minded people, it could offer opportunities to develop forms and strategies that designers and artists could then apply in other parts of their practice.

Certainly many of the musicians who perform already do that (though there was a lot of complaining about the festival's ongoing corporatisation), but the lack of almost any original ideas, a true understanding of the history of festival structures – other than at Do Lab — and experimentation with new images, forms, or structures seems to preclude anything but a giant trash heap, where the remains of these designs will join the millions of plastic water bottles and other detritus left behind by the event in just burdening our planet even further.