The studio designed the installation to be a point of interest for attendees of the festival, which runs for two weekends in April and is frequented by international celebrities.

The installation, called the Playground, has four towers ranging from 42 to 56 feet (12.8 to 17 metres) that are intersected by lattices of horizontal steel.

Taking influence from Dutch painter Constant Nieuwenhuys' visual utopia New Babylon and the work of Italian architect Aldo Rossi, the structure was designed to mimic certain urban features like piazzas and arcades, with a variety of colourful arches.

Architensions, which has studios in New York and Rome, used dichroic film, mirror film, and polycarbonate sheets to create the vibrant colours of the installation. Magentas and yellows form the towers, while the piazza element's low-laying rounded curves were fabricated in cyan.

"It provides an opportunity to experience a leisure space without the use of technology, simply by interacting with the space and its materiality," said Alessandro Orsini, lead at Architensions. "The user is at the same time a spectator and performer."

The installation covers a total of 21,168 square feet (1,966 square metres). A combination of polycarbonate cladding and steel frames makes the Playground appear to be in a state of semi-construction.

The dichroic film modulates the light during the daytime, making the material appear digitally rendered, and the materials cast colour onto the ground.

Festival-goers could not actually climb the towers, but were invited to walk through the installation and inhabit the piazzas.

Play enters the design in the colour and intersection of different shapes and materials.

"The design evokes a familiar urban landscape, where the significance of play is reverted to its original definition of free personal time, in other words, a playground," said Architensions. 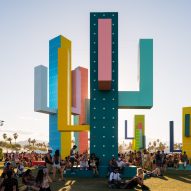 Somewhat ironically, given the suburban landscape of Indio – the city that hosts the festival – the designers said the Playground represents a "vertical city in a place where decades of horizontal sprawl have defined a certain type of leisure and suburban growth defined by apartness".

Furthermore, Architensions said that the installation challenges the form of the tower as something existing in an "urban luxury paradigm". Instead, the designers wanted the project to symbolise fun as well as promote "collaboration and freedom of movement".

The Coachella Valley Music and Arts Festival was cancelled in 2020 and 2021 due to Covid, but the festival has featured installations by renowned designers in the past, including 2022 Pritzker Prize-recipient Diébédo Francis Kéré's colourful baobab-inspired towers in 2019.

Architensions is led by Orsini and Nick Roseboro, and the studio has also recently designed a colourful playspace for children in New York.

The photography is by Michael Vahrenwald/ESTO, unless otherwise noted.