Ingenlath leads the development of bespoke electric car designs at Polestar, a brand owned by Volvo which recently began producing cars under its own badge.

"Having the opportunity to lead and launch a new car brand is definitely special," Ingenlath told Dezeen.

He started out in industrial design, but later moved into vehicle design after completing his studies at Pforzheim in Germany and at the Royal College of Art in London. 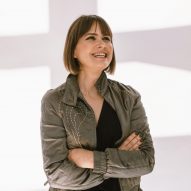 His career began as a junior designer at Audi, working on show cars including its Concept BlueSport. He has since designed numerous cars, leading the design of Skoda's Octavia II and Superb II, before becoming head of design at Volvo.

Ingenlath had always been fascinated by car design but it was only after reading his first car magazine – which featured a story about Ford's design studio in Cologne – that he decided to pursue a career in the industry.

"I discovered that indeed there is such a profession as being a car designer," he recalled.

"You could actually do that for a living: draw cars, design cars and get paid for it! That was what I wanted to do."